After a year and a half in Edinburgh, I'm assured I'd still not be mistaken for a local as I don't yet detest the Edinburgh Fringe. I also don't understand pies. Why does everything here have to be a pie? Meat pie, Scotch pie, breakfast pie, chips pie. I don't know.

I kind of get the Fringe animosity. For the month of August, Edinburgh turns into a permanent festival. Except that this festival is mostly made up of students trying to give you flyers. I sometimes felt there were more flyer-distributors than there were Fringe visitors. Initially I tried to take the flyers because at least I knew I'd recycle them. But after walking through Quatermile a few times and finding myself physically weighed down by the four tonnes of paper I'd accumulated, I decided to adopt an avoidance strategy. I've been told that, to put it mildly, I'm not particularly approachable. I have one of those faces, affectionately known as 'Resting Bitch Face'.

'What's wrong?' people always ask.
'Nothing. This is just my face.'

It turns out the only people in the world who DON'T think I have RBF are Edinburgh Fringe Flyer Distributors.

For the first week, our friend Bunch was visiting. So of course we went to as much Fringe as possible. I think by the end he was feeling more jaded by the Fringe than most of the locals. But we soldiered on.

The Fringe has some weird stuff. I was lured in to a show that promised an interactive murder mystery. So excited was I by the words 'murder mystery' that I somehow totally ignored the 'interactive' part. Now, substitute 'interactive' with 'mandatory audience participation' and 'murder mystery' with 'at the end she randomly took all her clothes off and demanded someone tie her to a chair'. To be fair, the audience at the show were utterly awful at participation. It was as if the whole audience was made up of multiple versions of me.

My friend Sam attended a show where the solo performer felt the need to ask that the audience not refer to it as a sex show, because that's technically illegal. So that will give you an idea.

Among my favourites was 'Seance'. High on the weird scale, you and 15 other people go into a shipping container, with one long dining table down the middle. It's decorated sort of like an old Victorian dining room. You each have a set of headphones that you put on, then are plunged into total darkness for 20 minutes while a purely auditory stereo seance takes place. The stereo quality was perfect, so the imaginary man leading the seance sounds like he's moving from person to person, and you just know there'll be a voice right at your ear at any second.

A benefit of the Fringe is that virtually every building in Edinburgh turns into a venue. That nice old church you always pass? A venue. Basement of that grimy pub you once had to drink in? A venue. The communal hallway for your flat? Also a venue. This means that you can visit all the buildings you always wanted to see into. One of my favourites was the vaults. There's something so mysterious about walking in a door and immediately going down stairs.

Despite my initial enthusiasm, I wasn't sorry to see it go in September. After a while this sense of guilt starts creeping in. How many times have I seen the poster for That-Comedian-I-Like and I still haven't gone. The crowds get a little irksome. Idea for next year: Special travelators for residents who just want to go to Sainsburys to do their shop. 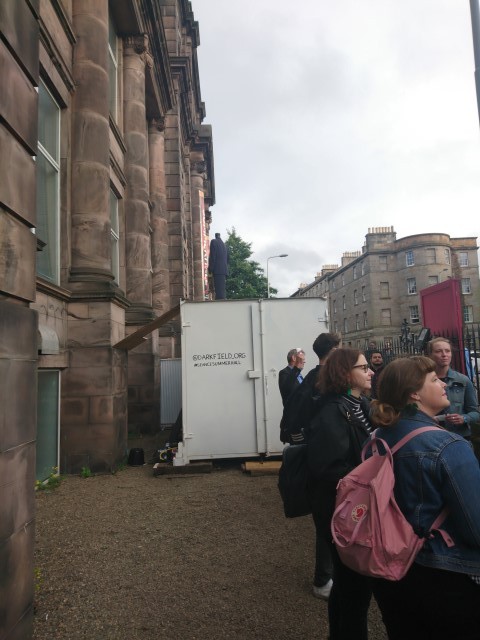 In a terrifying twist in the Manny tale, there was a headless mannequin on top of the Seance shipping container for the whole month of August. Just down the road from my flat. Coincidence?

20 September 2017
Argh, Matty! You'd better move back to Galway before he gets you. Great post.

21 September 2017
Hit the nail on the head! I almost had guilt or not seeing the few shows you described. The festival is definitely for organised planners. I guess on the whole for the number of people that pass through the festival it's reasonably well mannered.