What good is a brand new amp for your stereo system if you don't immediately build some sort of switch comparison circuit to test it against another amp?

My parents got me a new amp - an Onkyo A-9010 - for my sound system for Christmas. I had one (Rotel RA 972) that was good once upon a time. Though the volume control was always a bit finicky and for the last 4 years it sometimes only played out of one speaker. Fairly unbearable for an audio snob. The sound had been degrading slowly over time, but it was so gradual that I wasn't even certain of it until I came home and heard my Dad's stereo.

Around 30 years ago, my Dad bought his amp - a Sharp Optonica SM 4100. It must have been top quality because other than some crackle with the volume control it sounds perfect to this day. There was no real point testing my new amp against my old amp. By comparison, my old amp sounded like whatever band playing had decided to record in a tiled bathroom full of custard.

The real test was my Dad's amp, against my new amp, using the same speakers and audio input (an iPod. Speaking of which, that iPod is about 8 years old, still has good battery life and functions like it did when new). We chose Comfortably Numb by Pink Floyd for the test. Very familiar and excellent sound quality. But the test environment was flawed. Wiring the speakers up the old amp was a particularly long process, whereby you sort of bend the wires in a loop, hook them over the pot and screw them into place. My tired, old amp is the same and it has always baffled me that such an archaic system is still used. Having exposed copper wire that you have to manoeuvre is not a user friendly experience. The newer amp is slightly more sophisticated, but still not speedy. Anyway, for the test, we'd wire up the speakers to one amp, plug in the iPod and play Comfortably Numb for a few seconds. Then stop it, unwire them, wire them into the other amp, switch over the iPod and start everything up again. Then play Comfortably Numb. But the whole thing took so long that we'd sort of forgotten what the first one sounded like. We concluded my Dad's amp was better but also concluded that it wasn't much of a test.

So we wired the both sets of amp speaker inputs into 4 switches (Speaker 1 left, Speaker 1 right, Speaker 2 left, Speaker 2 right) and connected up the speakers to the common. This meant switching all four would change the speaker input from one amp to the other. The only issue was the source (the indestructible iPod). But unplugging and replugging that was really only a matter of about 5 seconds. 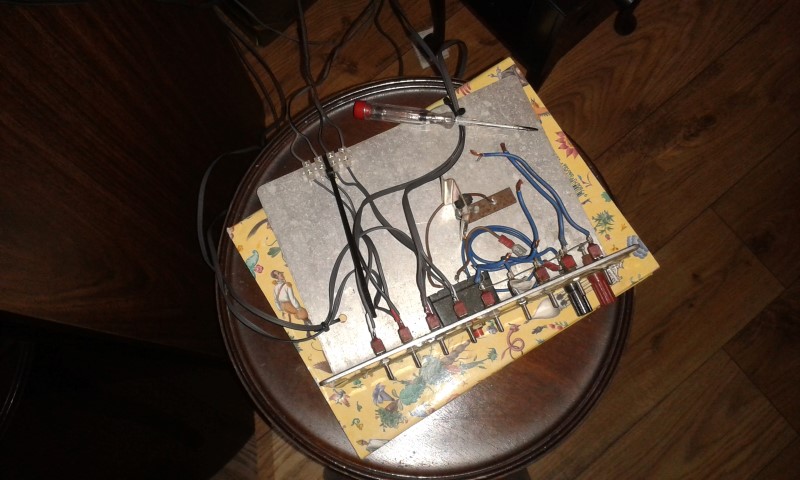 I haven't managed to capture much here if we're honest. But that's the circuit anyway. 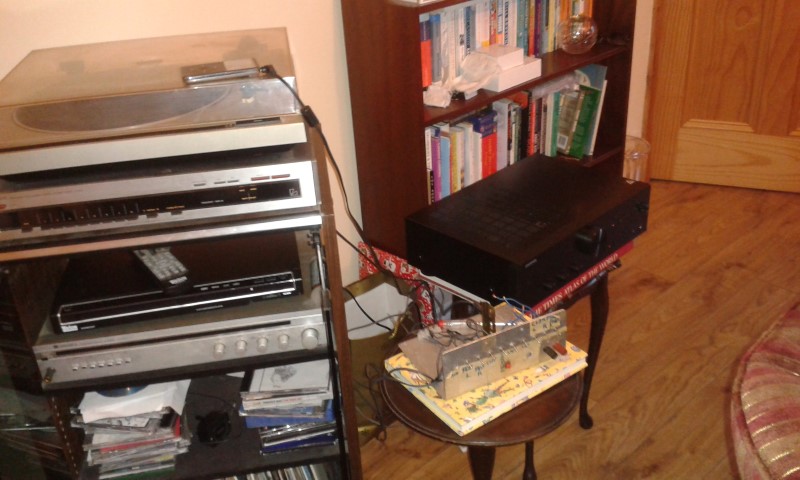 This is the full setup.