Seven nights was the longest we'd stayed in one place since leaving Australia. We'd read that a week is a good amount of time in Havana. This is true, but it probably wouldn't hurt to see more of Cuba if you could.

The idea of Cuba fascinated us. We wanted to see it before the embargo with the US was lifted, while it was still stuck in the 50s with no Starbucks and no Internet (okay, if I'd had a choice, I wouldn't have chosen no Internet).

Booking Cuban accommodation is no picnic. Three months ago we Googled hotels. Most of the major hotel/accommodation sites don't list Cuba, presumably because of their American affiliation. Internet advice said to avoid hotels anyway because they're very expensive, and shoddy. Stay in a Casa. A Casa is someone's house where you rent a room and they vary a lot in quality. We found a highly recommended one on Airbnb but when we tried to click 'Book', the button wasn't there. Then we noticed the little message saying "The service is not available in your country." Airbnb only allows Americans book Cuban accommodation. I have no idea. Anyway we got around it using secret techniques and managed to book Casa Havana, an old Spanish mansion-style building with double height ceilings and huge antique creepy furniture. The hall was long and dark and full of poltergeists. Our room didn't have much in the way of windows but it was perfectly pleasant and clean. Most importantly it had air conditioning. They also gave us breakfast every day, which was nice considering the rather sparse and bleak food supply in Cuba. 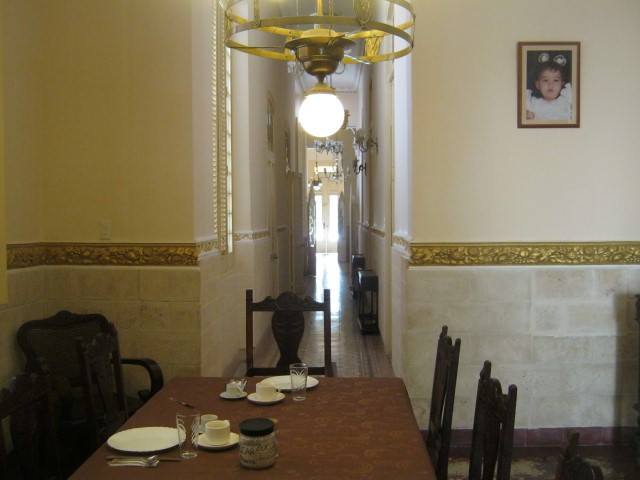 We stayed in Vedado, the region famous for gambling mafia hotels pre-revolution. Fidel didn't like those so he turned a lot of them into dismal apartment blocks, but some are still hotels minus the mafia and the gambling. We ate in one on our first night. Lonely Planet advised on lots of restaurants but we couldn't find any, and it had said that hotels were a bland but safe option. The safe part proved dubious on our last day when Dan succumbed to a food-related illness - the only one of our whole trip.

Vedado is shabby but charming and the old hotels are grandiose and tacky, with their decor never advancing past the 50s. The bigger ones will sell you a one hour Internet voucher for anything between 2 and 10 dollars. How badly did we need Internet? Not very badly at all, as it turned out. Though we did pay once midweek to look up where the hell the ATMs were. 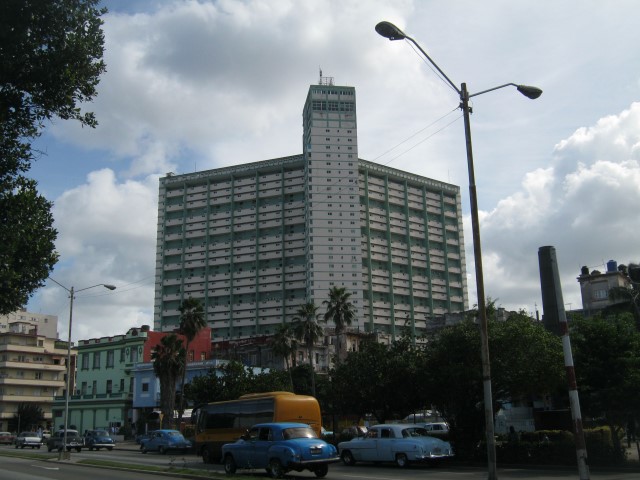 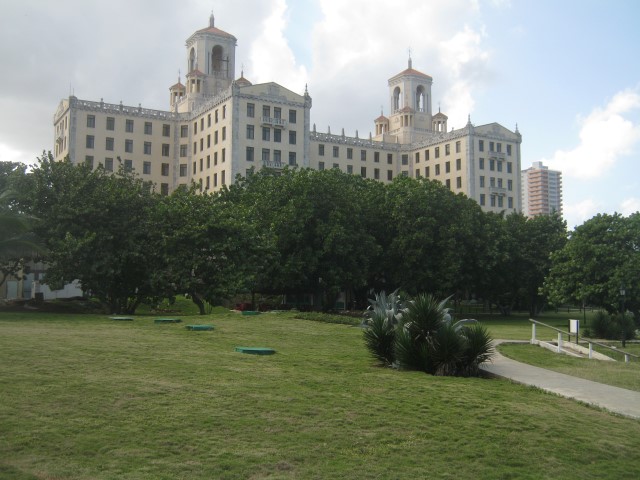 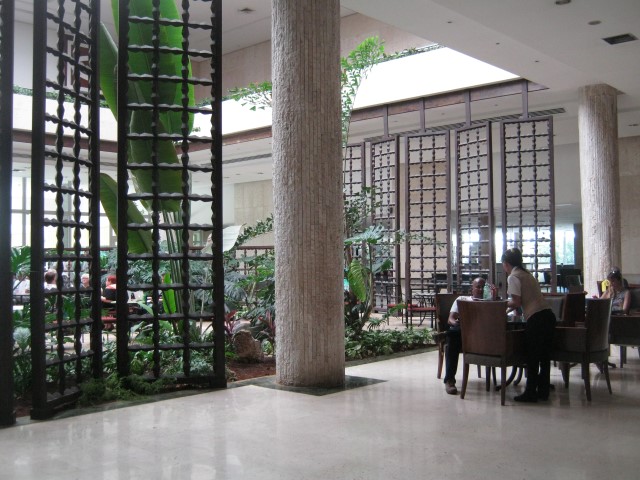 'Happy holiday!' or 'Hey where you from?' are phrases we heard a lot. On our first day we walked along the Malecon - a road adjoining the sea, towards the city centre. Two locals wished us a happy holiday and when we didn't immediately shun them, fell into step beside us. Where were we going? What were our plans? Don't go to the city centre, it's being fumigated for mosquitoes today. The lady told me about a free salsa class, only on today, just round the corner. I kept saying no we had plans and they kept following us. The man was trying to sell Dan cigars. They had to leave us alone eventually because they couldn't very well man-handle us into the salsa class. This happened many times, and it's hard to be blunt because inherent of Irish politeness. But I figured I'm doing them a favour because they don't want to waste their time either. It's not reasonable to say they're scam artists, but they do want money. It might be for drinks at a free gig, or for a meal at their cousin's restaurant, or for their mate selling cigars. As far as they're concerned you're a wealthy white tourist who's probably willing to shell out for stupid stuff. And that's fair enough. But that's not to say that it isn't really annoying. We found a suitable response was to smile politely, mumble something intelligible and walk away briskly. Sometimes they'd persevere a bit but if they shrugged and said okay I immediately felt guilty. Maybe this one person did really care where we were from. 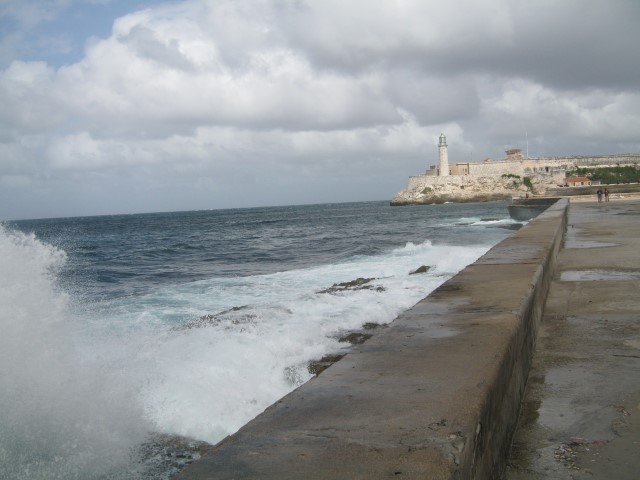 The Malecon. Not shown: Cuban friends who want us to pay them for stuff

Centro Habana has a lot of decrepit residential streets, and less hotels. Residents leave their doors open so it's impossible not to look. The decor is almost always old-person-wallpaper and a picture of Che Guevara. But the people are a cheerful, sociable bunch. The locals are always chatting, partying, listening to music or sharing an amorous embrace on the Malecon. It's easy to be deceived into thinking maybe money isn't everything. Until you talk to a qualified doctor who tells you he works as a handyman in the tourist industry instead because as a doctor he earned the equivalent of 30 dollars a month. The enormous queue outside the American embassy was also something to behold. Life can't be that simplistic and cheerful if everyone wants to leave. 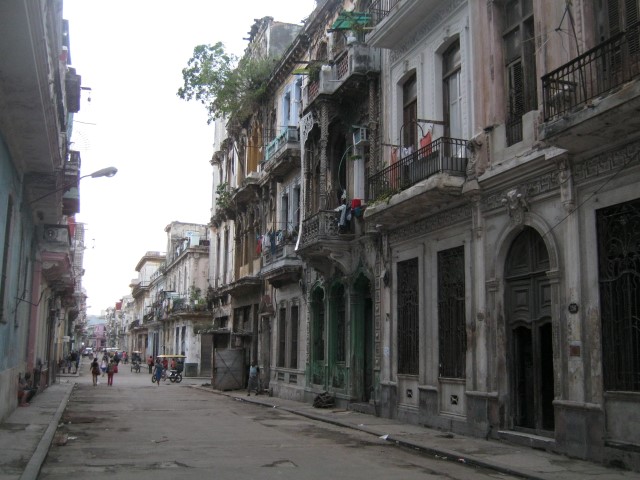 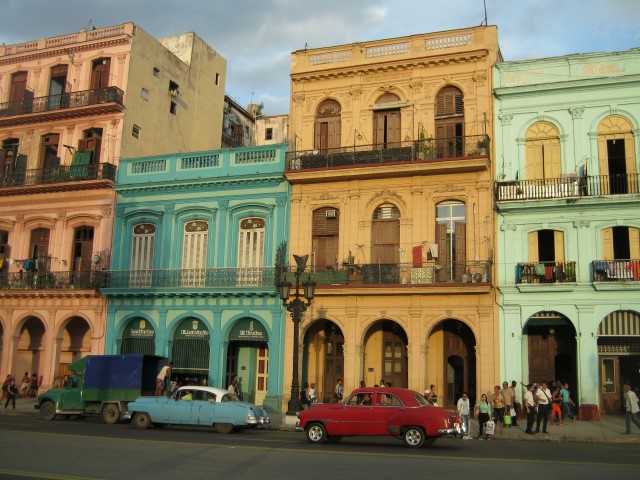 So much colourful character 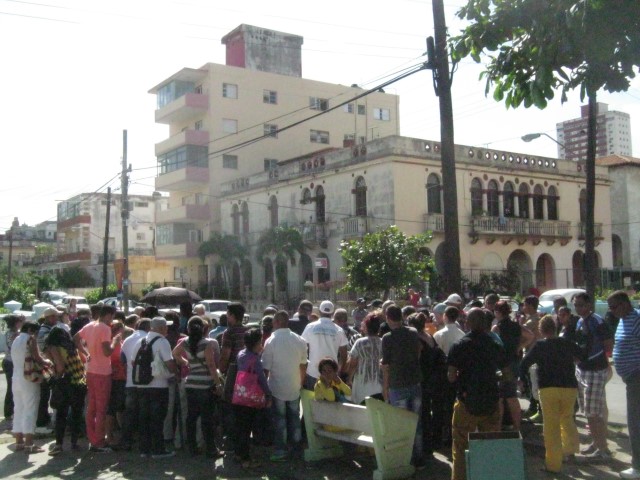 Habana Vieja is the historic centre. Better restored than anywhere else, it's quite beautiful. We spent a couple of days wandering around, nosing into the lovely old buildings. Lots of them are art galleries. I told a few of my arty friends that Havana had a really good art scene, but I didn't appreciate it at all because as my uncle Richard says, engineers are philistines. 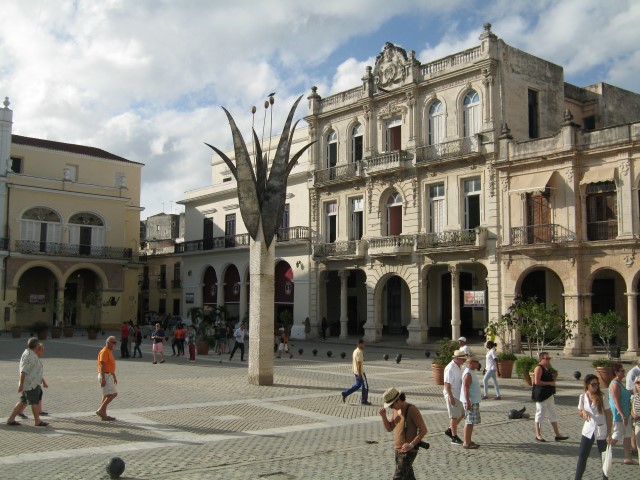 The historical centre has lovely plazas 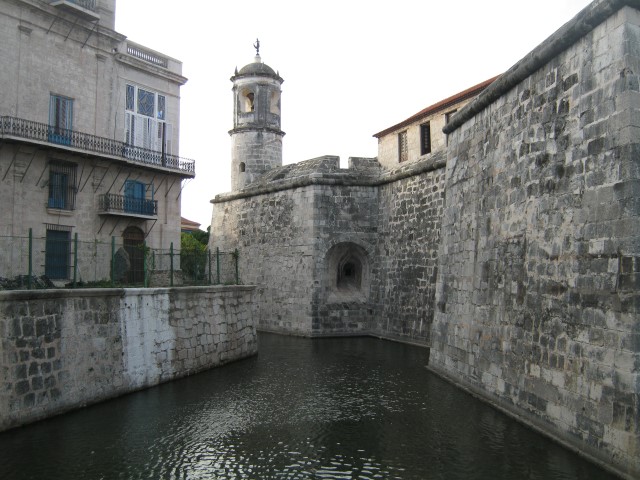 We were going to pay to go into this castle but they said everything is in Spanish. So we left. Only afterwards I realised I didn't want to read any placards anyway, just see the castle. But the moment had passed. 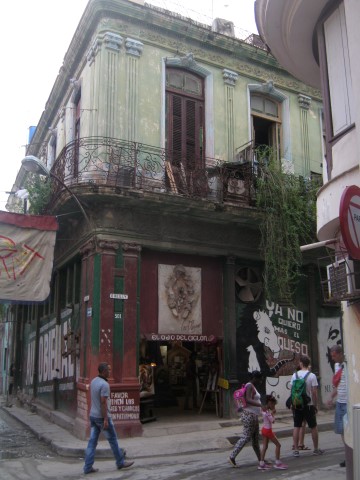 We were informed that you had to go see the canons firing at Morro Castle, so off we went. Morro Castle is at the other side of the bay so we paid for a vintage Ford sedan to bring us. "Morro Castle my good man," were words he completely ignored as he slowed to a stop outside a house, about five minutes from our destination.

"This is the only restaurant nearby," he explained. "Good food."

It didn't look like a restaurant. It looked like a house with a man outside. Either way, we weren't hungry. "Just Morro Castle thanks," we said.

He didn't move. Told us some more about the food in his friend's house. Explained again that this was the only restaurant. We tried a few more times to suggest Morro Castle and eventually I said, despairingly, "Please just bring us to the castle." He seemed to feel bad then because he agreed. As he moved off I saw him shrug to the guy sitting outside, who shrugged back and waved good naturedly.

"I can bring you on a tour around the area. One hour." He tentatively suggested, before reaching the castle. We were probably not considered a successful tourist fare.

We had a look around the castle. Good views across the bay. Some nice stone work. Then we realised it was only 6pm and the cannons weren't on until 9. We found another bored tourist, Gary, and together embarked upon a mission to not eat in our taxi's friend's house until 9pm. There was a restaurant, with an actual sign up, a bit down the road. The food was extortionate so we ordered some water and greatly irritated the staff by making it last two and a half hours. 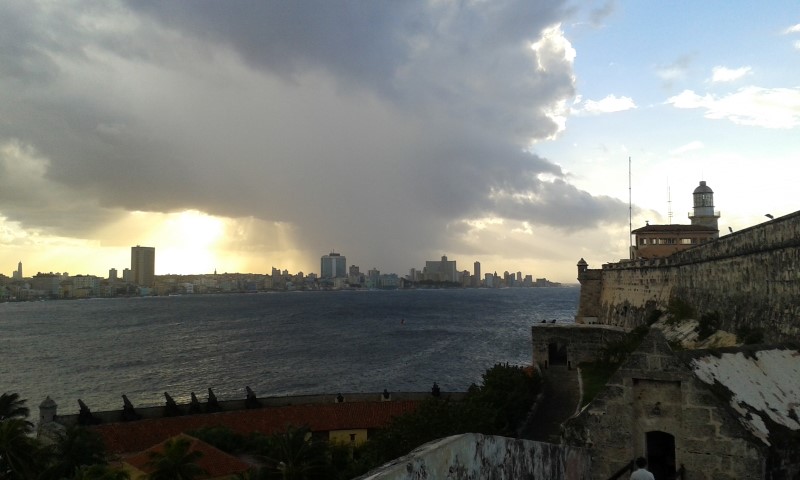 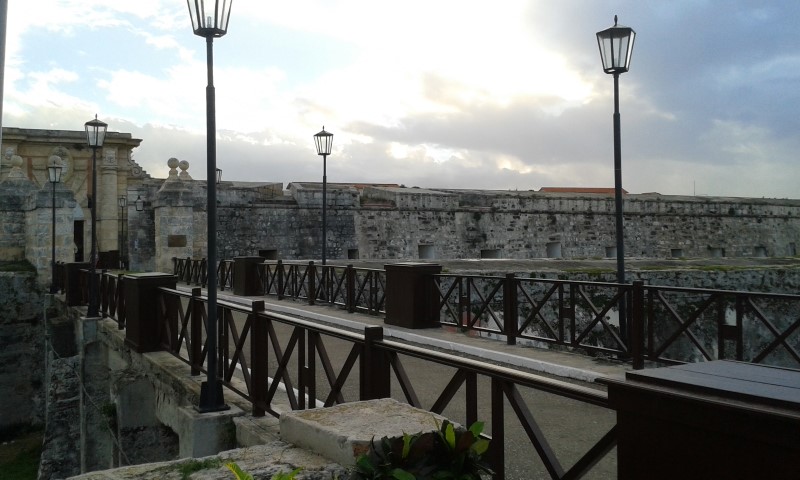 The cannon ceremony was lengthy. A lot of choreographed walking and candle lighting. It went on for about 45 minutes and culminated in a rather unspectacular cannon noise. I'd give it a miss next time.

The cars are cool. It seemed about 60/40 old/modern. The number might be more skewed towards modern in reality, because we had a tendency to block them out. The fanciest cars are usually taxis, and charge more than the boring modern taxis. It's awfully fun to ride around in them. 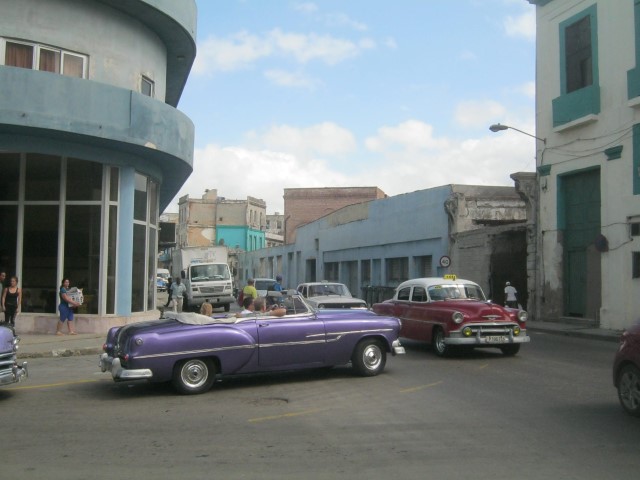 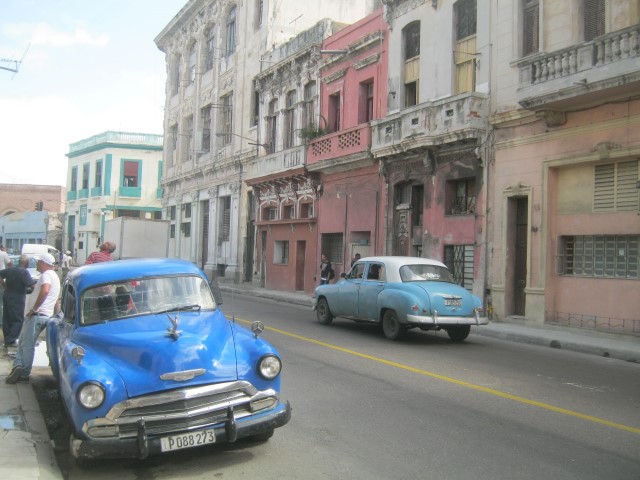 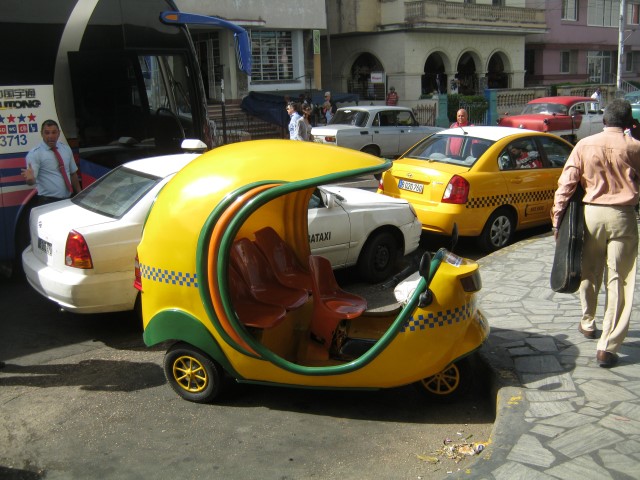 I was more interested in these. Dan wouldn't let us go in one

Food is difficult in Cuba. And I mean a level of difficulty above the usual "picky eater travelling". They don't have much to offer, except ham apparently. A lot of ham. Most things come with ham and they seem to substitute their lack of other ingredients with more ham. The quality is pretty low, chips taste like canteen chips cooled and reheated in a microwave. And there's no fast food options because no USA influence. There are very few shops, and if you do find one there are two problems: Firstly it'll sell a weird variety of useless products (we could never see bottled water). Secondly they usually don't accept our currency. There's a dual currency system in Cuba. One CUP is worth 1/24 of one CUC. As tourists, we could only get CUC (worth roughly the US dollar). Apparently if you queue for hours in a bank you can get CUP but it never seemed worth it. So the shops won't accept CUC anyway. We couldn't buy snacks, and had to get bottled water in restaurants and hotels. I'm sure there are ways around this but with no Internet we couldn't look it up. We found a good place in Centro Habana called the Sandwichera. They made yummy sandwiches, albeit with a lot of ham.

We didn't mind not having Internet. It added an extra challenge. That said, we'd have been completely lost without our Lonely Planet Cuba book, kindly given (lended, in case they read this, we will give it back) to us by the Irish couple we met in Guatemala. It was funny walking by the huge hotels and seeing the crowds of people, Cubans and tourists alike, sitting outside on their laptops, tablets and smart phones. Which is worse; China, where the Internet is readily and easily accessible but heavily censored, or Cuba where the Internet costs several dollars an hour in very select locations, but has no censorship? I'd argue Cuba I think. 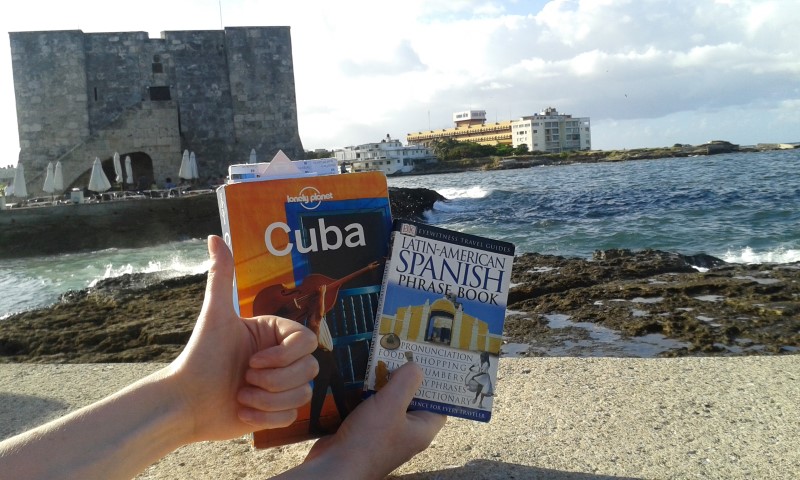