Mexico was only ever meant as a route to Cuba, but we figured we may as well see a bit of it so we booked 4 days. Originally we were going to stay on the beach in Cancun but Dan rightly insisted I'd hate that after one day so we stayed in Mexico City instead.

I'll never get used to airport arrivals in all these places. You're like a gazelle in a lion's den. Men everywhere shout about taxi offers, mostly with no discernible uniform. You battle your way through the multiple taxi stands to find the one official Trip Advisor recommended one, which never quite matches what they told you. 'That looks sort of yellow, and the name is nearly the same', you eventually reason and desperately clamber in, convinced you're being taken for a chump.

Our hotel was in the Historical Centre, which is full of lovely old stone buildings. They gave us a map of good central sights to see, which we ignored and immediately took several subways out to a large park called Chapultepec. Not really sure where we were going, we paid some money at a gate and found ourselves in a palace with lots of paintings. All the descriptions were in Spanish. No idea. The building was nice. 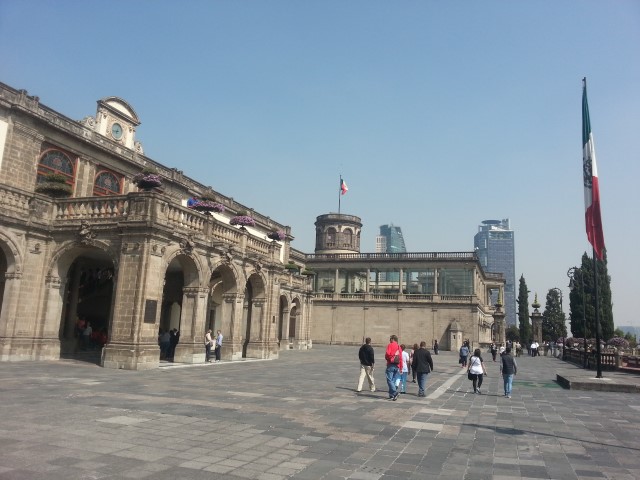 Trip Advisor rated the nearby Anthropology Museum as an absolute must, some particularly enthusiastic tourists saying you could spend an entire day there. I was sceptical, because museums are very boring. We went anyway of course. 24 rooms detailing the beginning of humankind, then a bit of a gap, then Mayans, then Aztecs. There were a lot of artefacts in glass boxes and lengthy descriptions. I remembered the name Cortez from Pirates of the Caribbean (after Dan remembered it, and told me that I must remember it). You could spend a day if you were a museum sort of person. I did find myself wondering when humans first decided to cover up their lower regions, but the museum yielded no answers. I'll put that in the Trip Advisor review. "If you're wondering when humans decided to first wear underpants, this is not the museum for you." I meant to look it up when I got back, but forgot. Now I'm writing this from Cuba which has no Internet so I may never know (I should clarify that there is Internet in Cuba, but you have to go to a large hotel and pay 2 dollars an hour. To find out more, you'll just have to read my Havana blog post).

We found a restaurant that served pasta (one of the 3 staple things I can eat while travelling and incidentally one of the 3 things I'm never going to eat again from December onwards). With a lot of loud gesturing I tried to ask if it was spicy. While rummaging around to find our phrasebook, a man at the table next to us translated. She waitress said no, I said good. It burnt my face off. I think she thought I wanted it spicy and asked the chef to add a few chillies.

Not content with one set of Mayan ruins in Tikal, we went to another set called Teotihuacan about an hour out of Mexico City. I thought they were the ones Karl Pilkington visited on An Idiot Abroad, but a quick Google revealed that to be sadly not the case. We got 2 subways to a bus station, then looked for the Internet-recommended bus. None of the busses said 'Autobus', as we were told, but several men assured us this was fine. So we got on one that had Playboy Bunny stickers everywhere and a smashed up front window. I was a little dubious but we couldn't find anything else and it did have Teotihuacan written on the front. The price was also what we read. It did make a rather surprising amount of stops in tiny local towns, but got to Teotihuacan in less than an hour so we were happy enough.

This site was much more intact, but I preferred the jungley, half-uncovered feel of Tikal. There were two huge main pyramids representing the sun and the moon (one of very few facts I remember from the anthropology museum). You can climb up the original steps, rather than added manmade ones like in Tikal. I imagined they've been a little enhanced for safety. At the top you get a rather spectacular view of the enormous city. 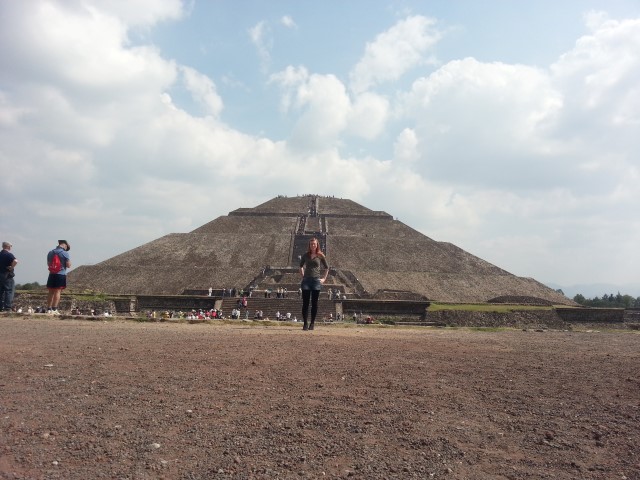 Pyramid from the bottom 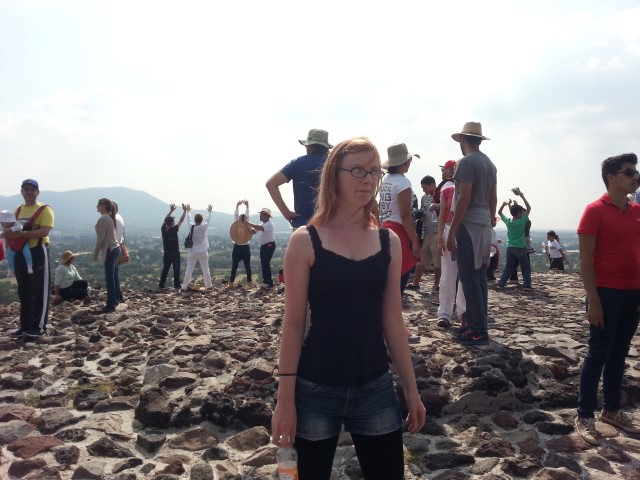 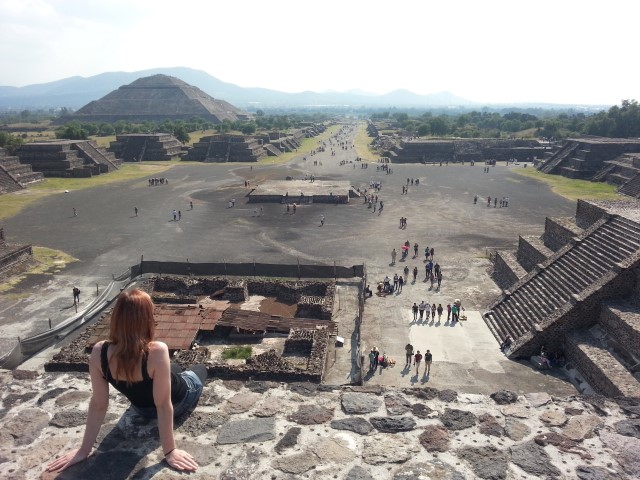 On the ground, there are about 50 people selling this thing that makes a tiger noise. 'Haha, who would ever buy that?' I laughed to Dan. Everyone. Everyone buys that. Some guys had a crowd, all queuing to buy a tiger noise device. What a great souvenir to remind you of your time at a Mayan temple. A tiger kazoo.

We went back to the road and a much sleeker bus pulled up. This can't be ours, we thought. Probably a private tour. The driver got out and shouted 'Mexico City' and ushered us on. Charged us the same rate. No Playboy stickers, perfectly intact window, air conditioning, a toilet AND 'Autobus' was written on the front. I have no idea what bus we took to Teotihuacan. We stopped in a town about ten minutes away and a policewoman with a bullet-proof vest and a frown got on and stormed down to the back, rummaged around, looked concerned, and got off. Were we supposed to have bullet proof vests? Were they, perhaps, under our seats? If an armed guard is going to get onto the bus I'd much rather they stayed there. Getting on, storming around, looking concerned and angry then getting OFF did little to put our minds at ease. This is typical of Mexico. There are police absolutely everywhere. Even in the lovely tourist city centre. There's usually at least 2 on each street corner, at least one directing traffic at every set of lights, and if you go out a bit there can be up to twenty per street corner. All armed. All with bullet-proof vests. A guy we met on the plane on the way out of Mexico told us that the police are one of the biggest problems, that they're threatening, extremely corrupt, and will shake people down for bribes indiscriminately.

Xochimilco. I don't really know what it is. We were advised to go there so we got a subway and a train. The train drops you off in a rather seedy looking suburb, miles away from anything. We thought we were being so clever getting public transport. There was a sign to 'Xochimilco dock' so we followed it for several streets. We arrived at a grim looking brown canal, crammed full of colourful rickety boats. 20 nearby boat salesmen immediately started shouting at us. We'd read that you didn't have to get a boat and could just look around so we tried to follow the canal, but the side street sort of ends and you're just walking around this dodgy suburb. The boats were completely unappealing so we gave up and got the train back. During this time we found out that Dan's phone wouldn't switch on anymore. We tried everything, including a new battery. Luckily we were going to Cuba the next day, where a smart phone is pretty useless. 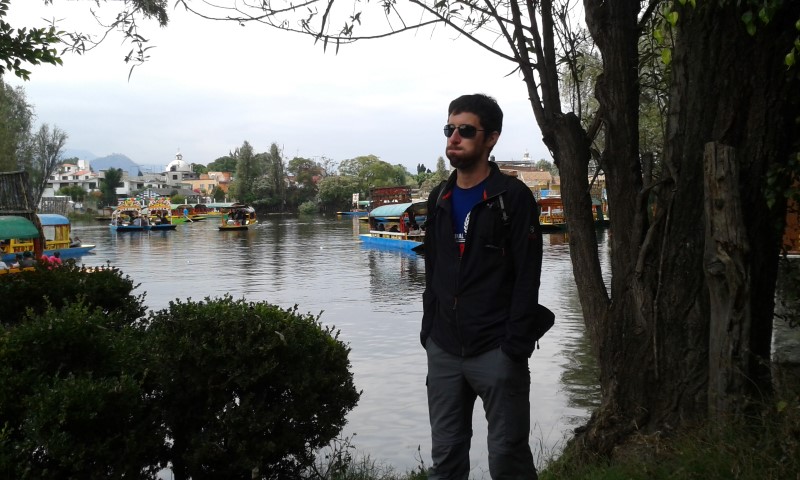 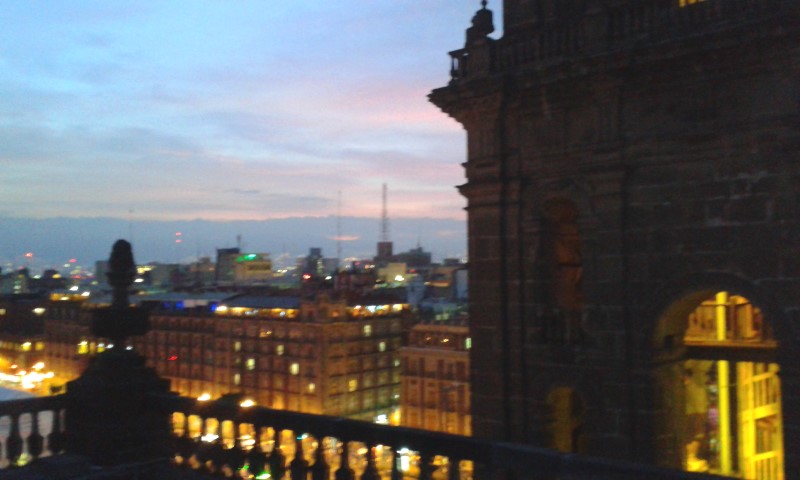 We got to go up the big cathedral on the square, which was nice. We didn't realise it was a tour and kept wandering off, until one of the guys working there told us we had to stay with our group because the police were watching (nice). We explained that we had no idea because we don't speak Spanish and didn't understand the tour so he took it upon himself to give us an entirely English tour. That was nice.

If you decide to go to a South/Central American country that speaks Spanish, learn some Spanish. You'll get by with gesturing but sometimes it's really difficult and everyone assumes you will at least have some basic words. Even if you say you don't understand ("No entiendo") they'll continue to talk to you in fast Spanish. We were very fortunate that a woman we met in Guatemala gave us her Latin-American Spanish phrasebook as she didn't need it anymore. We'd have been lost without it.