Phong Nha is a region of Vietnam known for its large caves. Unfortunately it's also known as the area that has the most amount of leftover explosive ammunition from the war. It's not hugely dangerous, we were told. Not landmines. Mostly unexploded bombs. If they didn't explode on impact they're not likely to by stumbling across them in a field.

We stayed in Phong Nha Farmstay on the recommendation of Dan's friend Eoin. You didn't have to work in the farm to earn your keep, just give them money. They had hammocks, a swimming pool and a night time outdoor cinema. They also gave you free bicycle rentals much to Dan's delight and my dismay.

We opted to do the 7km Paradise Cave trek (after I grumbled a bit) because at the end there's a massive room with a hole in the top where the light shines in. It sometimes crops up on those 'Travel Must See' lists. However it was rainy season. Which means, due to flooding, the 7km trek becomes a 4km trek. And while less trekking makes me happy, it was a pity not to see the one part we booked it for. All the other people we saw that day did the 1km walk, through the artificially lit part with a walkway. We felt very smug when we got to the end and our guide led us through a little gate into the blackness. 'Where are they going?' we're sure they all asked, with great envy. At the end we were given lunch. I hate when tours include lunch because I can never eat it. I'd pay more for a tour not to include lunch. Especially because it's always 'traditional' so if you don't eat it you feel like you're insulting Vietnam as a whole. Then Dan jumped in the freezing cold cave water while I pointed a torch at him so he could see. He says he enjoyed it. 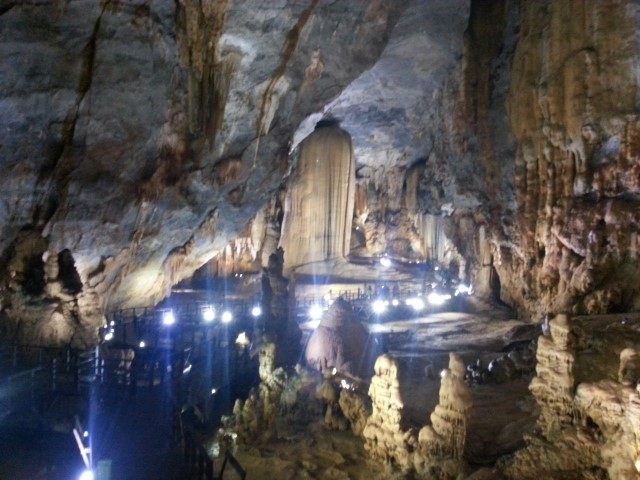 It's really difficult to take a picture of this cave 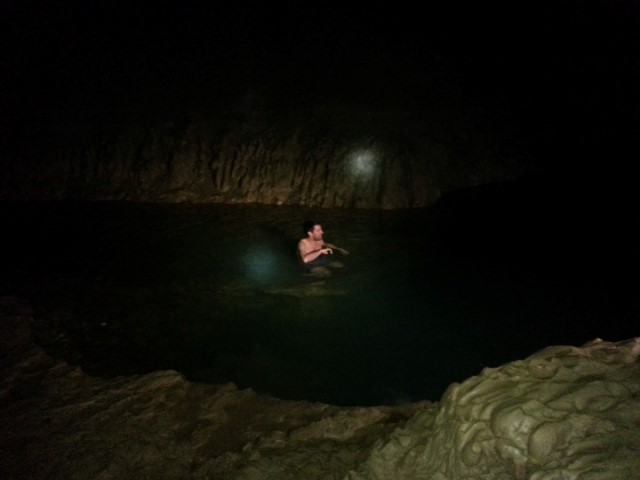 You couldn't have paid me to jump in there

The outdoor evening cinema was showing an utterly miserable film called Heaven and Earth that night. The films always have a Vietnam theme, which is fair enough, but this was too much. Wall to wall, relentless sadness. I'd give it 4 out of 10. The outdoor cinema was great and at a particularly poignant scene one of the Farmstay dogs jumped straight up onto my stomach, causing inappropriate laughter all round.

We were sceptical when Ben, the owner of Farmstay, told us to see another cave. He was very insistent so off we went. You get a boat down the river, and sometimes you'll see a load of tourists who need extra people to fill the boat so they pay less. We didn't know anything about where to go, other than the location of the boat port.

When we arrived a large group of Vietnamese people, about our age, bustled us over to a ticket office shouting 'You need to buy tickets!' over and over again. It was confusing because we knew we had to buy tickets, so why were this group jostling us so much? We had no idea so just went with it. Then they bustled us onto their boat, which had 2 remaining free seats, so that made sense. Not one tourist in sight, which was not what we were expecting. They gave us some sandwiches so we figured it was probably ok. Since we had no idea how long the boat ride was we just sort of waited. It pulled up at a port and one of our new friends said "We just have to sign some papers, be back at the boat in five minutes". What? Do we have to sign papers? Are they going to sign our papers for us? Then they all got back on the boat, paperwork presumably complete, and we went into the cave.

The cave has a river running through and for our portion anyway was completely lit up. I liked it a lot more than Paradise Cave. The boat brings you to the end and back then lets you off to walk around up from the river. As soon as we got off our new friends seized us and took about 20 photos of and with us. We chatted the whole boat ride back, as a couple of them had decent English. On arrival they invited to us to a local beach but we had no mopeds this time so rather regretfully had to bid them goodbye. 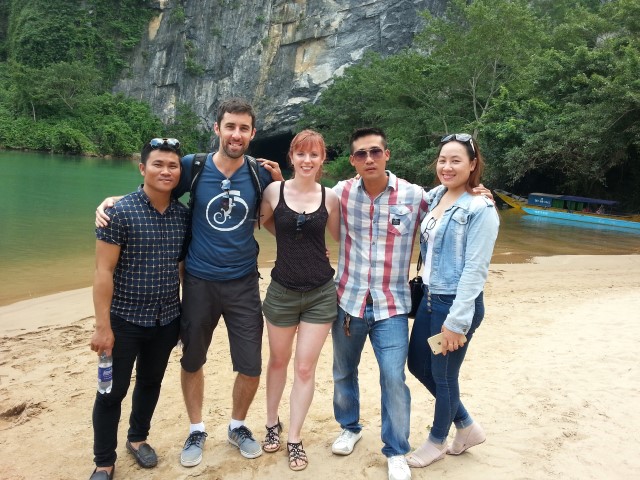 These guys were great

We cycled to the Pub with Cold Beer, which is so far out into the countryside you're certain you must be wrong. Luckily there are signposts for it everywhere. Some tourist discovered it and now all the local hostels promote it. It's more known for serving very fresh chicken than cold beer. I wasn't keen on choosing a chicken and watching it meet a grisly end. I prefer to keep a level of detachment from my food. So we didn't get any chicken. But Dan said his beer was cold.

We cycled back to the Farmstay for many hours, and en route met a group of guys who were having their own beers outside a house. They beckoned us over, took some photos, and kept offering us beer. We eventually managed to leave and got back in time to see that night's movie, the much more cheerful The Sapphires.

We met an Irish family in the Farmstay and Dan's mum used to live almost next door to one of them when they were kids. Mad.