No one in Vietnam calls it Ho Chi Minh. All the written signs still say Saigon. Saigon is a much nicer name anyway.

Saigon can best be summed up by Dan's thoughts at the end of our first day: "How do you cross the fucking road?" There are no apparent road rules and an endless stream of traffic, mostly scooters that come in both directions. We learned by watching locals and this is no exaggeration: To cross the road you first find a zebra crossing. No one will stop for you so you trust that they drive around you. At any given time you'll have 50 scooters flying in your direction so you weave and they do too. It takes a while to get across but don't stop. Stopping confuses them. Shuffle slowly and carefully. Then there you are. At the other side. Unscathed, but dripping in trauma sweat. Sometimes there are pedestrian lights but these are more a guideline than a rule. Because of the vast density of traffic many scooters seek a handy shortcut on the footpath and ironically this is the only place they won't bother to weave around the bewildered pedestrian.

You could watch for ages at a safe view point. It's fascinating.

It's hard to get a good image because when 50 mopeds are charging at you, whipipng the phone out for a picture is the last thing on your mind

There are no tuk tuks though and that was a delight. People find other stuff to shout at you on the street. Taxis, shoe shiners, massages. But not hearing 'tuk tuk?' every 2 seconds still came as a relief.

Our two days in Saigon were an inevitably grim history lesson in the Vietnam war (called the American war here). What would such a trip be without a visit to a war memorial museum? The War Remnants Museum is devastating as expected. There's a floor dedicated to war photographers so you can imagine how harrowing that was. They overdid the anti-American sentiment though. The whole thing was horrific enough. There was no need to add blatant anti-American bias everywhere. It detracted from the integrity a bit. Outside you could buy novelty Viet Cong soldier hats. I saw a large white tourist wearing one later that day. I despair.

Bleak history did not finish there. Our second day was a trip to the Cu Chi tunnels by boat along the river. These were tunnels that the Viet Cong used to hide from, and generally outwit the Americans. The tunnels were miniscule. To give tourists an idea, they actually had to be widened because we'd never fit in them, being so big and fat by comparison. One part of the tour let you walk through for 50 metres, though you could leave each 10 metres if you couldn't hack it. I couldn't. Even widened it was horribly claustrophobic. I lasted 10 metres. Dan did the 50 and he's about 11 foot tall. 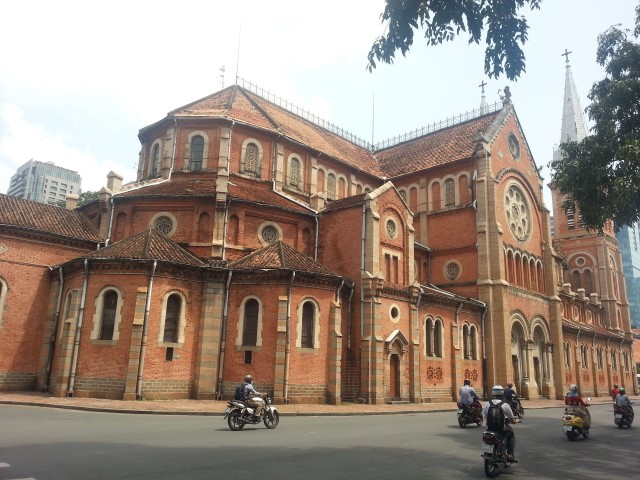 Before leaving Melbourne I had this great idea to get eyelash extensions. That's when they glue big black plastic eyelashes onto your regular eyelashes with superglue so it looks like you're always wearing mascara, and you always look fabulous. In theory. 3 weeks after their application, in Ho Chi Minh, it all started to fall apart. Left eye looks great. Beautiful evenly spaced long dark lashes. Right eye is somewhat more... Sporadic. Large clumps have fallen out of the centre, taking my own lashes with them. Where they remain they stuck together, pulling on my regular lashes, causing swelling. I gave up and decided to have them removed in one of the many beauty salons. Either that isn't a thing in Saigon or they had no idea what I was talking about. No one could help. They look absurd. I've done some Googling and will provide updates on potentially disastrous home remedies. Then a further update on acquiring a snazzy pirate eye patch.