The orangutan portion of our jungle adventure took place in another village called Bukit Lawang. We pulled up to a reception building in a somewhat normal town and were greeted with... Our luggage! Spirits were elevated. The village part we stayed in was sort of off the side of the main town. You go through the reception area and there's footpaths on either side of a sizeable river. The footpath streets are lined with shops, bars and houses, all of which seem to have interchangeable staff. It was busier than Tangahan but no less scenic. The only drawback was that we had to carry roughly 8 enormous bags up a 2km hill. We wheezed and complained until we saw a local guy carrying a fridge on his back.

That evening we played cards in the bar opposite our accommodation with some locals and other tourists. The people were extremely friendly and would often just sit next to you and initiate a chat (they all have great English too). When we got back to our room (fancier than Tangahan, though still only had a cold shower. You think it'll be refreshing. It is never refreshing) we found we had a visitor in the shower. An enormous black cockroach had popped by to greet us. We responded with the customary reply of running out screaming, and burning the room to the ground. Eventually we conceded that we'd have to use the bathroom so Dan heroically kept guard in the hallway while I braced myself for the worst and ever so slowly, entered the bathroom. What's worse than an enormous cockroach in the shower? NOT BEING ABLE TO SEE THE ENORMOUS COCKROACH. We pretended to adopt an out of sight, out of mind approach. I don't like to exaggerate, but he was bigger than me.

Andre brought us into the jungle the next day to see some orang-utans. Several other tour groups joined us in a clearing, where two mother and baby orangutan groups were congregating. We watched them swinging around, the girls awwing at the adorable babies, and took a lot of blurry, meaningless photos. Andre took Dan aside and told him that because we weren't on a schedule, we were going to engage in battle of wills with the other groups. With less people around, he said, the orang-utans were likely to come right down to the ground, and eat the fruit he had brought. And so the battle commenced. We won, because Andre is the greatest. And he was absolutely right. The two mothers were semi-wild, meaning they were kept in the reserve centre, and sent back out when deemed capable. The babies then were fully wild as they had been born in the jungle. The two mothers took food straight from his hand. We couldn't go too near as the mothers can be a little tetchy and you don't really want to end up in a row with one. 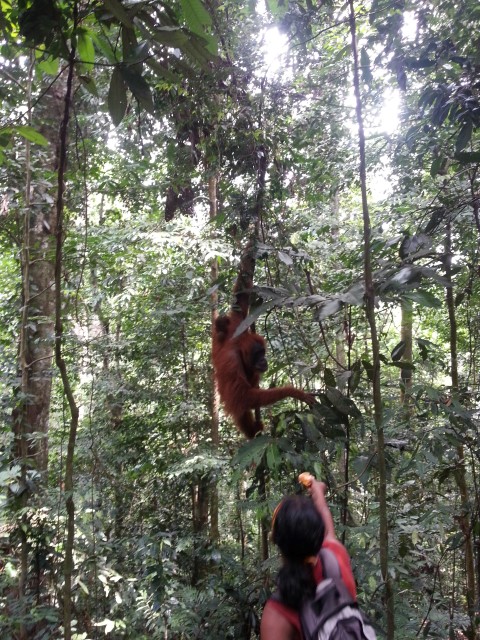 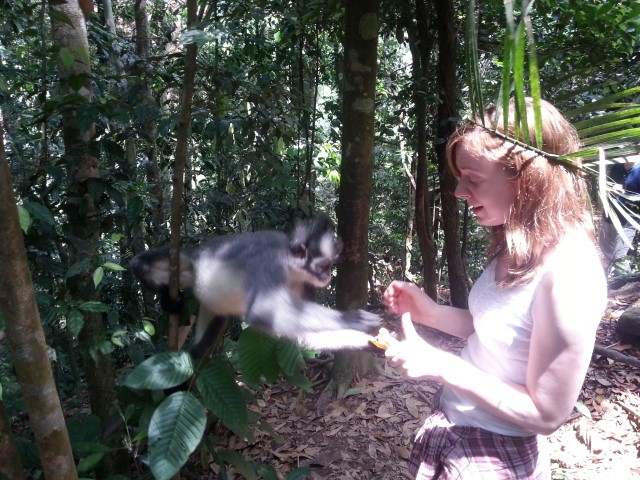 Onwards we went further into the jungle, and came across some Tomas monkeys. These are small, extremely tame furry monkeys who you can touch and feed. Some guides had brought fruit for us to share with the monkeys (I ate most of the fruit) and Andre made us a jungle hat. I sat for a moment, to reflect on the monkeys and delicious passion fruits, and put my hand on the ledge beside me. It was completely rotted through and, like a scene from The Mummy, hundreds of ants immediately spilled out and went all over my arm. I was promptly bitten on the hand and the sting caused me to cry out like an absolute baby. But you try tell me that getting bitten in the Sumatran jungle by an exotic insect won't make you forsee your inevitable death hours later. Andre whipped up some dockleaf juice, applied it, and the pain vanished. The stupid bite only left two tiny red dots so everyone thought I was overreacting.

Our trek ended at the river, where several locals joined us to cook up a barbecue. While we paddled gingerly, terrified of the spikey rocks and strong current, they appeared on the other side of the river, carrying heaps of barbecue apparatus and marched across barefoot. We are useless.

The barbecue was incredible. I'm dubious about barbecues at the best of times, and if hosting one would probably cook all the food in advance. But I had toughened up a bit at this stage, and even ate barbecued chicken and fish. They also provided a huge platter (made of banana leaves) of tropical fruit, rice and crackers. So I spent almost two weeks in Japan eating just toast, get into deep Sumatran jungle and eat their natively spiced barbecued meats. I'm still not cured of my picky eating, but I think Sumatra did make me an awful lot better.

It was a day for facing fears, because our next task was to tube (white water raft) back down the river to the village. I reminded Andre that I couldn't swim, but he reassured me that it was perfectly safe. The raft was four large inner tubes roped together. For safety, you hang on to the person in front of you. They have a somewhat more relaxed attitude in Bukit Lawang. It was awfully good fun though, I have to admit. 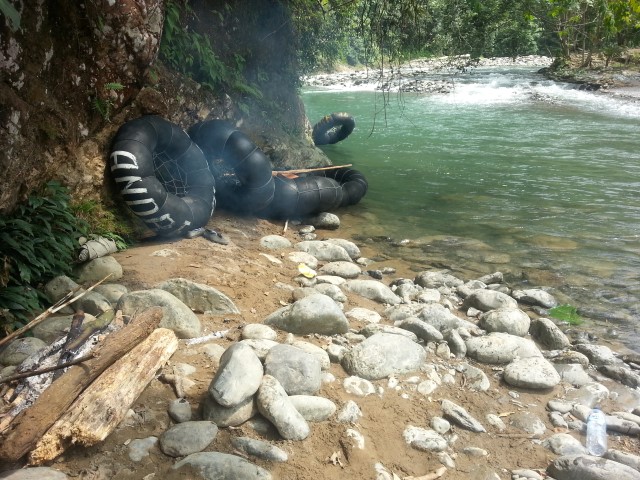 The rafting equipment did not fill me with confidence 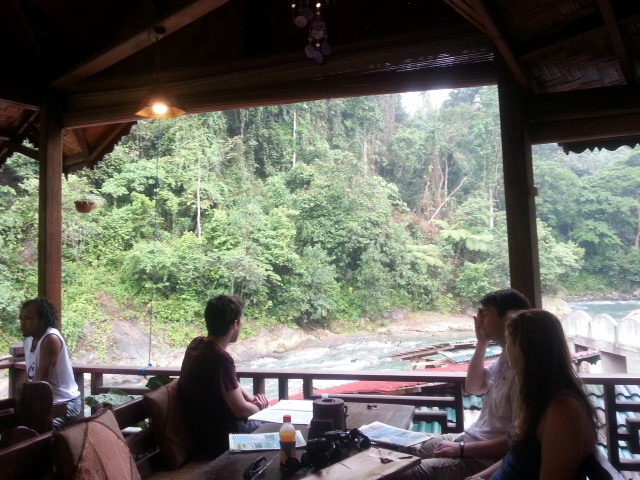 This is where we ate most of our delicious meals 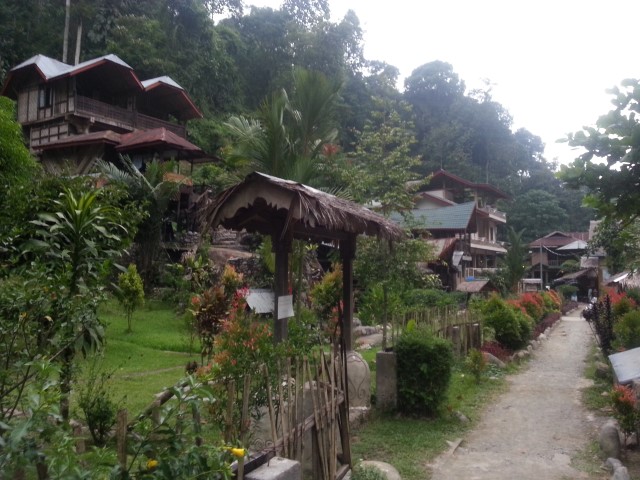 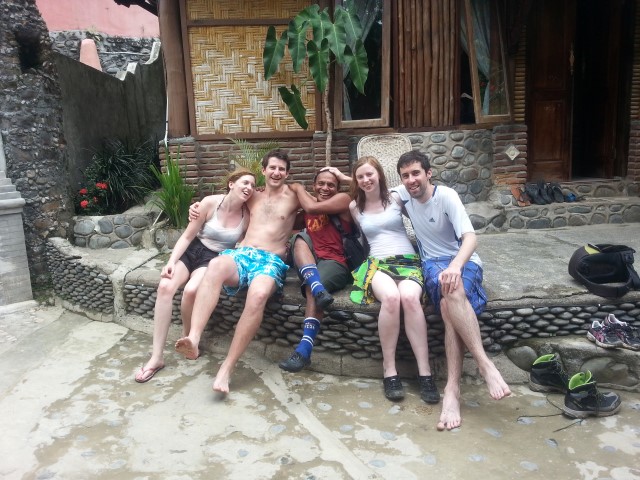 Us with Andre after the rafting. I am so happy because I didn't drown