About 7 years ago, Dan got an American visa stapled into his passport. When leaving, the American customs guy ripped it out, and tore a tiny piece off the page corner. Usually this has warranted no more than glare and a few questions at passport control but Medan airport in Sumatra, Indonesia was a little different.

The passport control man stared at the passport for about a minute, then marched purposefully over to someone else, who pulled Dan into a room for questioning. I was left standing, bemusedly, at the desk. The guy who had completely screwed Dan over grinned at me and said, 'Looks like your boyfriend's in trouble', before stamping my own passport and sending me on my way. I waited for fifteen minutes, unsure if Dan was on a plane back to Kuala Lumpur when eventually he emerged, looking pale and wan. The official had flipped through his passport several times, and told him that he couldn't let him in, he had turned away people for less than this a week ago. Dan, with nothing else to do, continually said sorry and insisted there was nothing on the page corner. I'm not sure why he let him in if it was apparently such a big deal but we weren't going to question it any further.

After that we paid $50 in airport tax to some guy at a desk, for reasons we still don't understand. All this took so long that when we arrived at the baggage carousel, it had stopped and the remaining bags were in a pile at the wall. I say bags, I meant 'bag'. Because only mine arrived. Dan's was still sitting, presumably, in KL. The Air Asia staff cheerfully explained that they couldn't deliver our bags to Bukit Lawang because it was too far away. The alternative was that we just wait in the airport until they arrive. This did not suit very well, as our Expedition Jungle driver was waiting at arrivals. We waited for Anna and James to arrive on the following flight, while deciding what to do. They were late, and eventually showed up displaying signs of distress. What ails you, we asked. Their bags were in KL.

The staff eventually agreed to send the bags, but we weren't feeling very reassured. All we could do was wait and see.

Andre was our guide for the whole Sumatra trip. We had booked an Expedition Jungle adventure online, which included Andre picking us up, bringing us to see elephants, showing us where to eat, teaching us useful Indonesian phrases, and generally being an all-round fantastic guide. The trip to Tangkahan village, where we would see the elephants, took five hours on mostly dirt roads with the consistency of a particularly crater-filled part of the moon. We drove through lots of little villages, with houses and stalls mostly made from wood, though many had a brand new expensive looking mosque. This made me sad, and I hate to think that's what the government channels money into.

Tangkahan was breathtakingly beautiful. It's a village in the jungle across a huge river. You had to take a rather treacherous looking rope bridge to get to the other side, but I'm sure no one ever falls in. We had two rooms with a shared balcony. The cold-only shower (hose) and non-flushing toilet (you just pour water down it) took a bit of getting used to (I didn't get used to it) but the room was large and comfy and the view from our balcony was spectacular. Just down from our cabin was the bar. They served cheese toasties. I no longer cared even slightly about the shower. 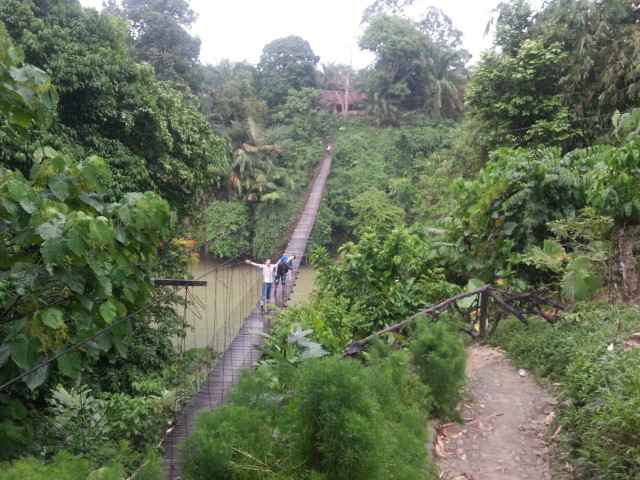 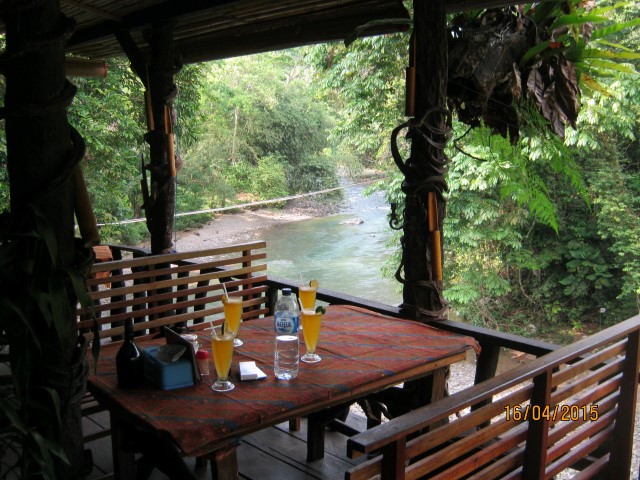 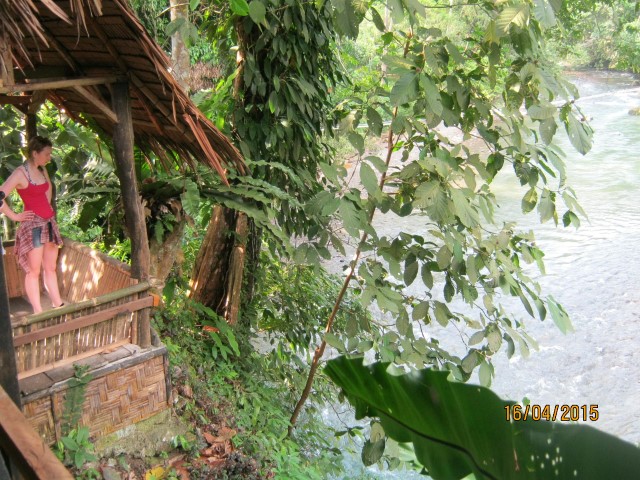 The following morning Andre brought us to the elephants. You walk down a little pathway to the river, and then you see a load of elephants, just splashing around, playing with the guides. The elephants, in the river, in the jungle, was possibly one of the most beautiful sights I've ever seen. They bring you down to help wash them, which I'm sure is a completely pointless exercise for the elephants but they seem to like it. Then they get the elephants to give you an elephant shower, where they spray you. I was still very hygiene-conscious at this stage and couldn't help thinking of all the Trip Advisor warnings about river water so opted not to do the elephant shower. Okay, our guide shrugged, and told me to stand a few feet away. Then without my knowing he told the elephant (Augustina) to aim directly at my back and I got absolutely drenched. Served me right.

You then ride the elephants back up to the village, through the river. It was fantastic. 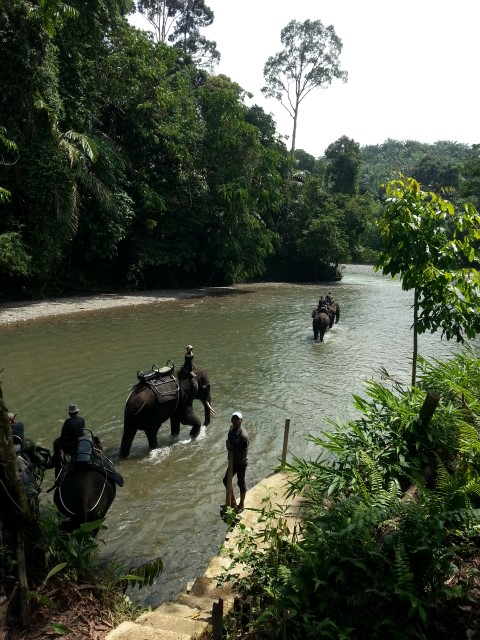 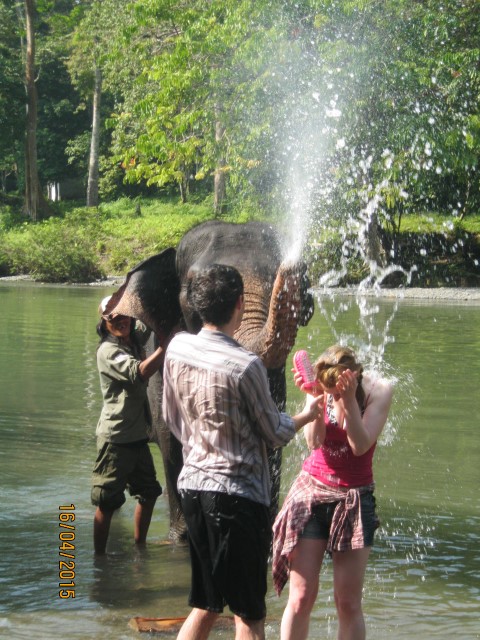 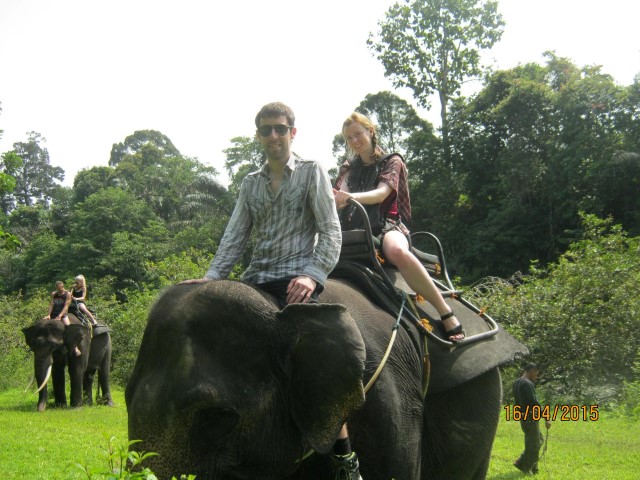 After this, Andre brought us to another part of the river where you can swim. I can't swim, so I sadly splashed about near the edge. Andre enquired as to why I wasn't swimming over to the hot spring at the other side, and I explained my swimming situation. He summoned Dan, James and Anna, and the four of them heaved me over to the other side, all five of us being pulled downstream by the current. It was worth it (for me). I'd never been in a hot spring before. It's very unusual. Like a bath in the centre of a very cold river. You could go right into the cave in the rocks where the water was extra hot. Andre told me that the sulphuric water is great for skin conditions so I tried to put some in my ear to cure my ear infection. Tip: Do not ever do this.

We were sad that we only had one night in Tangkahan, but happy that our next destination was Bukit Lawang where our luggage was allegedly being sent. So we all piled into the car again, and drove another four hours.

6 May 2015
I'm really enjoying your descriptions of where you have been. sounds like the trip of a lifetime!

7 May 2015
Thanks Eileen! It was pretty incredible. Indonesia was our last stop before Melbourne (where we are now) so our adventures have temporarily come to an end.