All the advice on the Internet said to visit Kyoto when in Japan as it is full of beautiful temples and scenery. What we didn't know when we booked, was that it was cherry blossom season, when all those classic Japan pictures with lovely cherry blossom trees are taken. This is a big deal for tourism and when we tried to book accommodation there was only one place left in all of Kyoto. It didn't look great in the pictures, or the description but it seemed to fulfil the basic sleeping and showering requirements.

As it turned out, it was a Japanese Love Hotel, of the chain aptly called Japaneedz. A Japanese Love Hotel claims to offer discrete getaways for couples, providing certain useful facilities in the room, and you can rent per night or per the hour. As you can imagine, we assumed we were staying in a brothel. But it was that or no cherry blossom temple-filled Kyoto.

So straight from a purifying night in a mountain top Buddhist temple to a Kyoto brothel. We were instructed to check in at the Japaneedz Cafe, close to the main train station. It all seemed very normal, and they gave us a really good Kyoto map. The only weird bit was that we had to come back at 8pm to get the shuttle to the actual hotel with all the other guests. You also had to check out each day (we stayed two nights) and haul all your luggage back to the cafe. This was presumably so other guests could use your room at an hourly rate, which I tried very hard not to think about at the time.

Our first evening sent us on 50 train and metro journeys to the bamboo forest park. Our luggage handler friend from Osaka told us to go here so we honoured our promise. Our apprehension at getting the weird shuttle bus temporarily vanished because the park was so pretty. I can see why cherry blossom season is such a big deal. There's a temple in the middle of every patch of grass in Japan and this was no exception. It's like there were just a crowd of builders waiting for people to leave an area so they could fire up a new temple. The temple was alright but I much preferred the garden with all its little bridges and lakes and lovely coloured plants. It's much more tranquil than the vibrant parks in China but they're both beautiful in their own ways. 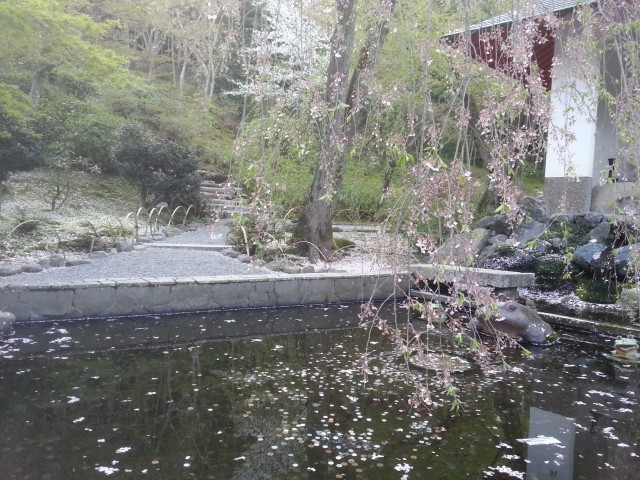 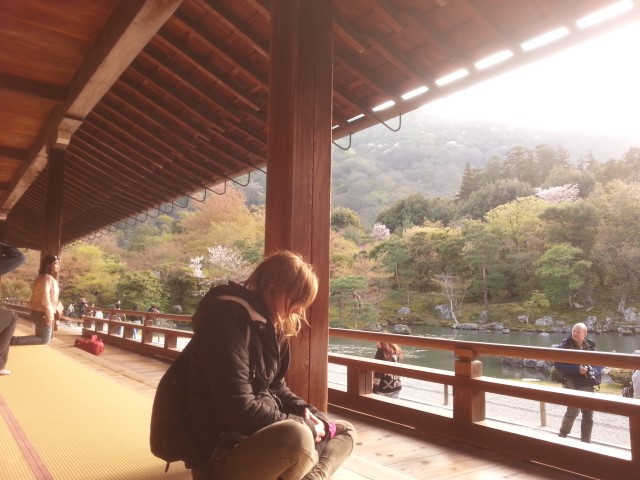 I'm reflecting on how this is my 400th temple

Eating for the picky Westerner is not easy in Kyoto. The main restaurant streets aren't obvious and there's no big square with KFC, Pizza Hut and TGI Fridays, to which I had grown accustomed. Given the traditional vegan gelatine-soaked-in-goo meals of the previous two days I had now reached a critical situation: Almost two days and all I had eaten was a bowl of rice and the greatest cheese toastie. I was close to death. We persevered for ages, combing the streets, looking for anywhere that served chips. We were about to do the worst, and step into McDonalds, when we realised we could just stand outside and use McDonald's WiFi to Google pizza places. We were saved.

Pizza consumed we headed back to the cafe to get the shuttle with the seedy amorous couples. Who would we meet? Businessmen with suspiciously beautiful and youthful ladies? Fully leather-clad dominatrixes? It was two other travelling couples our age who found it on booking.com. So disappointing.

The hotel was a 15 minute drive through a few housing estates. There were disco lights in the hall and 'romantic' DVDs to rent. In fairness to the room, it was massive, clean, comfy and had the best shower of anywhere we stayed. Yes the walls were dark red, and there was a very strange 'romantic movie' on the TV when we walked in but you'd pay an awful lot more for a suitcase-sized room in a business hotel with a crap shower. We particularly liked how the window gave you a view of a really nice hotel. I would go so far as to recommending these if holidaying in Japan because they are a decent cheap alternative to the usual shoeboxes. We gave them a good review on booking.com. 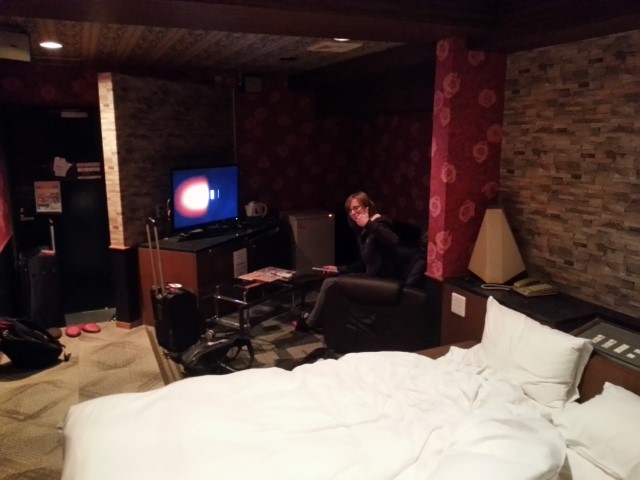 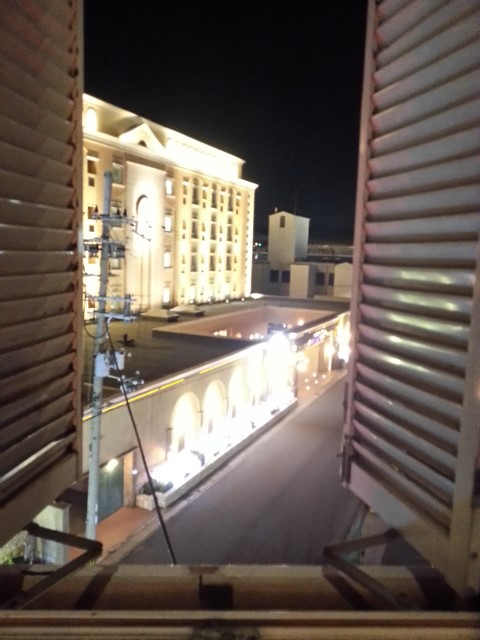 Stunning views of a much nicer hotel

We visited another temple in Kyoto and reached our threshold of temples. Once again you had to take your shoes off and walk around a very hard freezing cold wooden floor, and thinking back I can't even distinguish between the five hundred temples we saw. One delightful thing about this particular temple, was that ladies dressed like geishas wandered around, getting beautiful photos taken. I don't think they were real geishas (apparently you do see them training sometimes) because they didn't have the hair or makeup, and seemed to usually just be with a boyfriend. They were very pretty though and eventually I channelled all I had learned in China, and asked one girl for a picture. 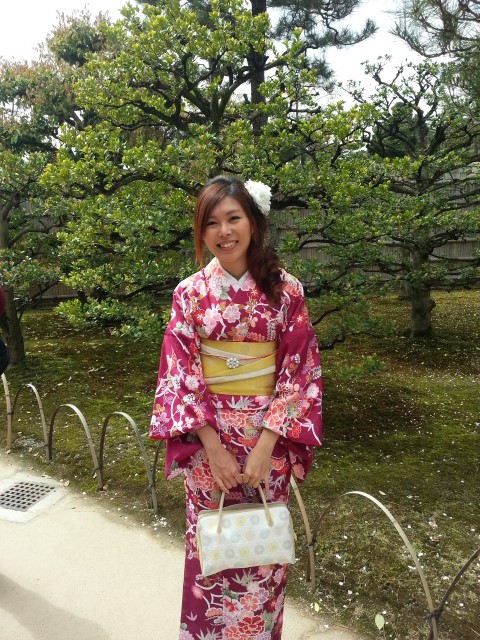 I thought the Manga museum would be cool, having never had even the slightest glimmer of interest in Manga. Turns out, it's an old school full of Manga comics that you pay a load of Yen to get into. Yes if you're a diehard Manga-fan, or interested in the deathly dull history of the 80 year old school. No otherwise.

After that we searched high and low for a nearby Cat Cafe. We walked up and down the block, as instructed by Google Maps, about 3 times before finally seeing a tiny Cat Cafe sign with an arrow. It was down an alleyway, up an elevator and through a little hallway. Not intuitive.

You pay to go in, and you don't even have to buy a drink. They only serve drinks, which is nice, as I was dubious about the hygienic aspect of having cats crawling all over your sandwiches. You sit on the floor on a cushion and the cats ignore you because cats are bastards. I persevered, shouting "LET ME LOVE YOU" at the cats as they ran out of my reach, and eventually one sat on my knee. It seemed moderately content, though certainly not happy to be there. Dan almost had some luck, and got a cat to at least stay still while he petted it, until the Cat Stealer arrived. A seasoned Cat Cafe visitor no doubt, she immediately rented a cat toy and lured all the cats straight to her side. No one else stood a chance. She deliberately targeted the cats other people were playing with and whipped them all into a mad frenzy, and basically ruined the Cat Cafe for everyone and I hate her. 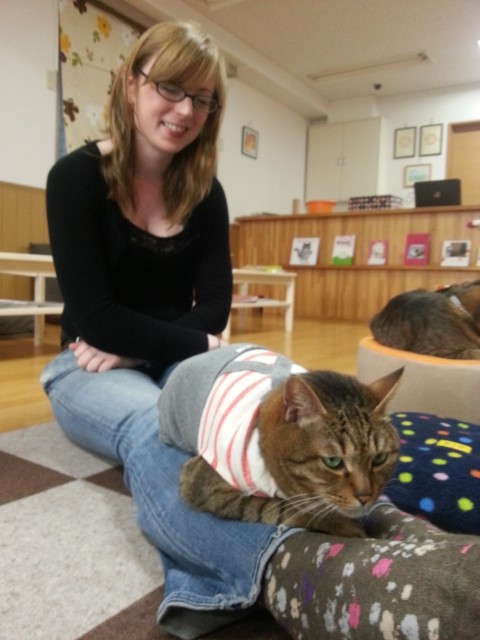 She has allergies so has to wear clothes. Adorable.

All the cats were rescued strays, and they told us that lots of Cat Cafes use purebred, purchased cats (news to me that there are breeds other than "cat"), so that was lovely. Even if the cats hated us.

5 May 2015
There was also the hilarious wtf moment where we walked into a tiny Kyoto bar with a Swiss couple we had met in Koyasan, only to find this dingy bar streaming Swiss league football on the big screen?!? bizarre