We flew from Arenal to Drake bay, via San Jose, in a Cessna Caravan. These are tiny little planes with 10 seats, no tea trolley, and about 3 jokes about the tea trolley per flight. We sat right up the front and could watch the course and weather maps over the pilots' shoulders. The airport was smaller than my flat, and check-in gave us a plastic boarding card, which we had to give back on the steps to the plane. I loved it. 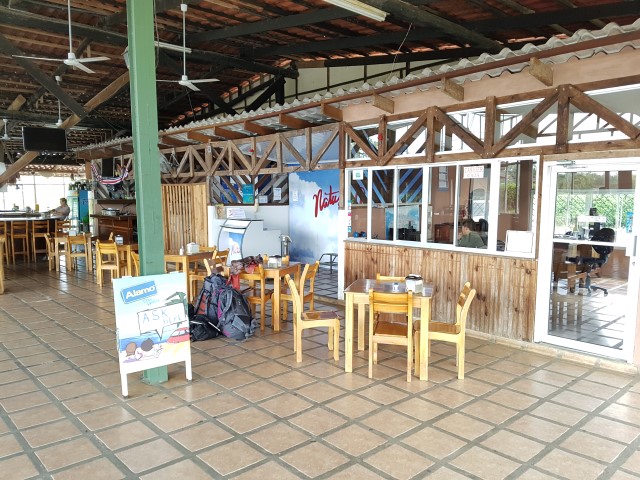 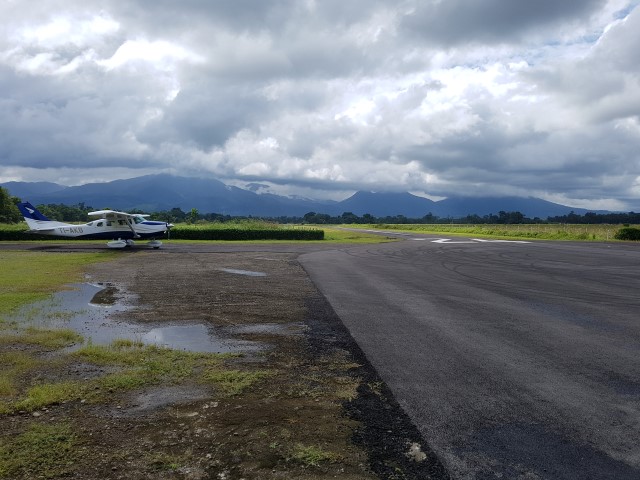 An initially concerning aeroplane experience. Fun once you get up.

Our hostel sent a car to the airport for us. They stood on the other side of the fence where the plane landed and tried to get us to come through a small opening. But then someone unloaded the bags and brought them all to the main gate, a few meters up. It soon became obvious why, as we had to pay a $7 'exit tax'. Money resentfully parted with, we hopped into the taxi. Immediately we were accosted with a speech on how much extreme, but laid back, fun the hostel was. 'We had a Halloween party last night,' he said. I'd completely forgotten it was Halloween. 'Didn't wind down until 3am! That's how we roll here in the Fun Hostel. So laid back, you won't believe it. Fun, and being laid back. That's what we're about. You guys are gonna love it.' So far all I loved was that the massive party had happened the night before we arrived. I think he misunderstood my enthusiasm.

Checking in, we were told about the many extreme activities we could do in Manuel Antonio. I wasn't surprised to see several references to ziplining and rafting. The hostel was mostly made up of steps, ensuring you had to go up and down at least four flights of stairs to get from any one point to another. But it was clean and pleasant, and had a good pool. It also had cute large wild rodent that roamed the paths, presumably looking for some laid back fun. I couldn't get close enough for a good picture.

Just opposite was a restaurant, the centrepiece of which was a C123 cargo plane (shot down over Nicaragua in 1986), converted into the restaurant bar. I firmly believe this was Dan's favourite part of Costa Rica. There was also a rather fantastic view of the sunset. We weren't in a town, so our dining options were limited to the aeroplane place, the pizzeria next door, and the cafe where we were staying. I was a little alarmed at the lack of towns in our Costa Rica destinations. I'm not used to things being slightly inconvenient. 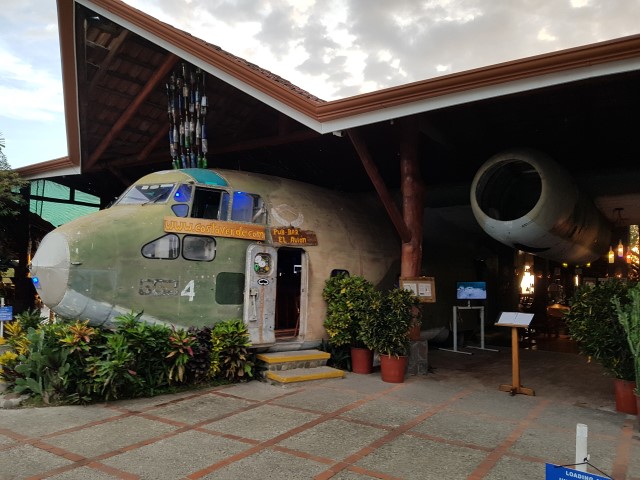 This trip contained a surprising amount of interesting aeroplane bits 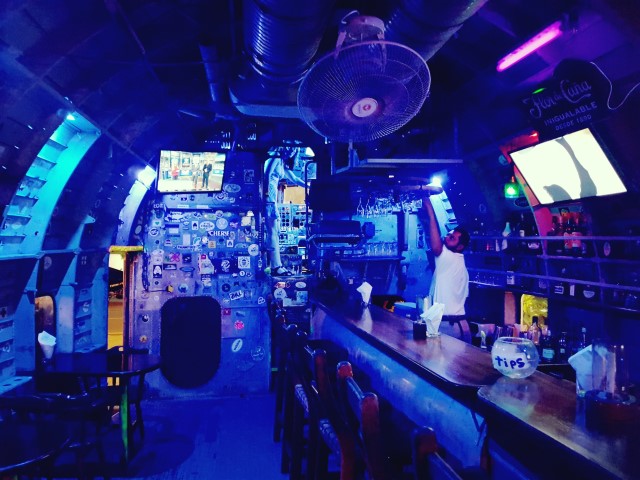 The interior, including a cockpit you could climb into. It is blue because I don't know how to use a camera 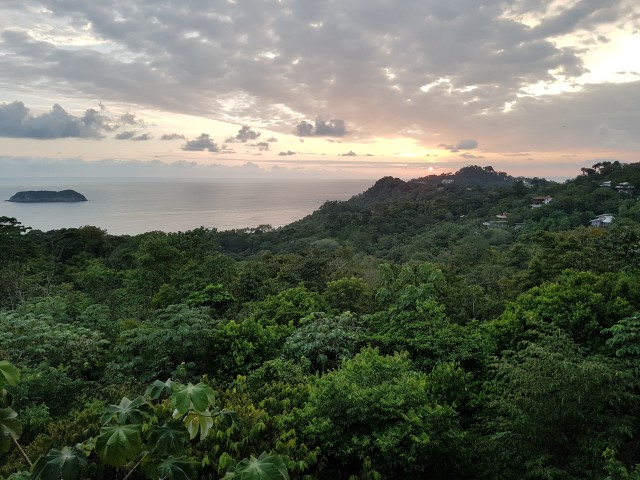 View from the restaurant bit was decent

The next morning, we carefully avoided being bustled into a surfing tour bus, and walked about half an hour to a national park. En route we were approached by many locals, telling us that without paying them money, we had no hope of seeing any wildlife. Trip Advisor had told us that you can't move for the wildlife, and there is absolutely no need to pay a guide. Trip Advisor was correct. If anything, we could have done with less wildlife.

The national park was tourist-friendly, with wide paved paths and glum-looking Americans who'd been duped into paying a "tour guide". In saying that, we did pass one such group as their guide was showing them a sloth through a telescope and they let us have a look, even though we hadn't paid.

I had really wanted to see a sloth. In our whole time in Costa Rica we saw three, but they were all so high up and obscured by leaves that it wasn't quite as spectacular as I'd imagined. We did see a lot of monkeys that looked like Marcel from Friends. But my absolute favourite was real life raccoons. The Americans were understandably baffled at our amazement as we constantly clapped our hands together and gushed about how cute the furry little burglars were, with their furry little burglar hands. I believe in America they view them as we view pigeons. There were also howler monkeys. Not as fearless as the capuchin, we only saw them in trees, rather than on the beach stealing people's suncream. They're cute and noisy. 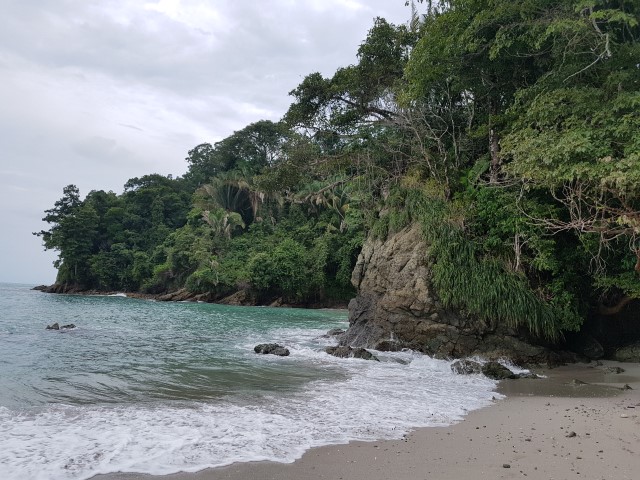 Look at this beach. I hardly believe this beach and I was there 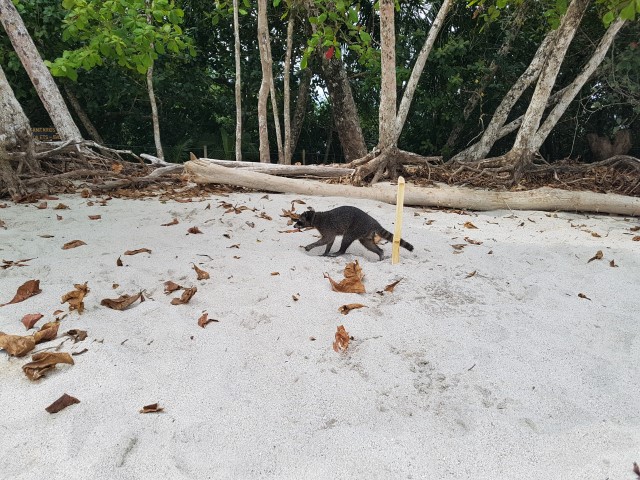 Look at this beach raccoon! Dan had to stop me adopting it and smuggling it home 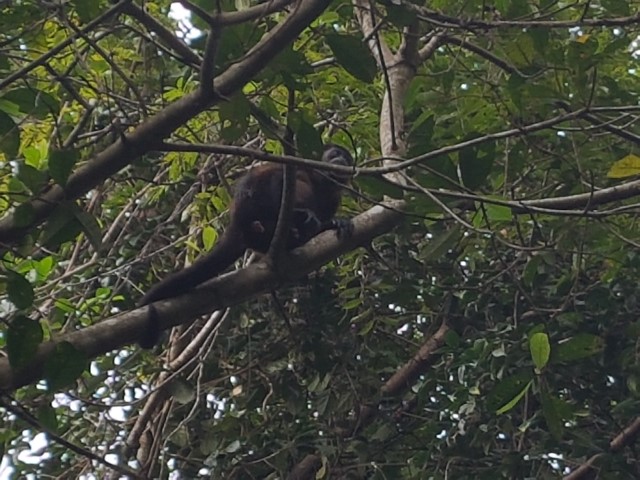 Howler monkeys are definitely the cutest of the monkeys we saw

That night I lay sobbing in bed with immense stomach cramps, courtesy I think of a Costa Rican tap water build up. I refused to eat, so Dan went across the road and brought back a takeaway pizza. In the time it took, I opened up more to the idea of eating three pizza slices and, much to Dan's dismay, joined him in the hostel bar. Our super-laid-back hostel was unhappy that we'd brought our own food in and we received a stern warning.

The pizza was good.