Medellin is pronounced Med-eh-jean, you uncultured swine. So now we've both embarrassingly learned that after pronouncing it wrong to several locals, let's continue.

Edinburgh should have prepared me for all the bloody hills in Colombia. But then I remembered I drive everywhere, so that won't work. Medellin is in a valley, and up the sides of the valley. We got a taxi from the airport that took about 45 minutes, just enough time to convince yourself you're being driven into the mountains to be held to ransom. Very unfair on our perfectly pleasant taxi driver, who of course just dropped us off at our hotel. We only had a day and a half in Medellin, something that is somewhat of a theme on this trip. So on our day of arrival we ate a Subway and took some trams to Acevedo. It became increasingly obvious that El Poblado, the area we stayed in, was by far the wealthiest area of the city. Our plan was to get a cable car from Acevedo to Park Arvi, at the top of one of the surrounding mountains, but when we got to the top, it was closed. This was probably something the woman who sold us the round-trip ticket could have told us, but we decided not to dwell.

The cable car in itself is a worthwhile experience. It brings you up the mountainside over stacks and stacks of favelas, showing you undeniably that there is a lot more to Medellin than El Poblado. With the park closed, we got out at the Santa Domingo stop on the top of the mountain, formerly called Pablo Escobar. During his hey-day it was one of the most dangerous areas of Medellin, built by Escobar as a lookout spot. Now it's somewhat of a tourist destination. More colourful and in a generally better state than most of the neighbourhoods leading up to it, it's a lively, charming place. We bought some ice creams.

Colombia is great if, like me, you enjoy a cable car

The view from the cable car on the way up. Not all the townlands were as nice as Santa Domingo

On our way back, we stopped in the Candalaria (not to be confused with Bogota's Candalaria), a busy central area with never ending street markets. This will be a good place to get a postcard, I thought naively. 400 stalls later, I gave up. There was not a single postcard to be found in Medellin. But while there were no postcards, there were some large Botero statues. They really like Botero in Colombia.

This is a Botero horse.

Not a postcard to be seen

We ate in El Poblado. Eating in Colombia hadn't been particularly tricky so far. Aside from the local cafes (not brave enough for that yet) there's more pizzerias than there is Latin American food. We found somewhere that served pasta in tomato sauce and ate there twice. I ordered the same thing, twice. The waitress was very impressed with my Spanish when I managed to say 'sin pollo' (without chicken - I tend to eat vegetarian when travelling). I did try to learn some Spanish before we left, using the language app Duolingo. The problem with Duolingo is that it really pushes you to get streaks (when you do an exercise every day) but once you break your streak you lose all motivation. They need to work on their gamification.

The following day we got a bus to Guatape, a town about 2 hours outside Medellin. Tourists pay for their seats in the station but the driver will pick up any locals he wants along the way. It was drama-free until a group of 6 police stopped the bus about an hour in. A sniffer dog got on and started barking at a man with a teardrop tattoo on his face. He was taken off, frisked, his switch blade taken off him, then let back on. I guess I was just glad he no longer had his switchblade.

As we neared Guatape, the scenery got more and more beautiful. Multiple lakes broke up the jungley mountains. We got out at El Penol, a big hill with 740 steps to the top. Note, these steps do not include the hill up to the steps. I was not happy. But I wheezed my way up nonetheless (I didn't see Dan do any wheezing), pausing to let women with babies and 80-year-olds pass me by. When we reached the top I collapsed into a chair. Dan didn't even sit down, until I got so irritated that I demanded he at least pretend the climb was tough. So with good grace he sat down and exhaled in an exaggerated manner, implying that he too was exhausted by the climb. I was too actually-exhausted to complain. The view was good though.

Imagine getting all the way up the hill and realising you STILL had to climb the 740 stairs. Like Arthur's Seat all over again. 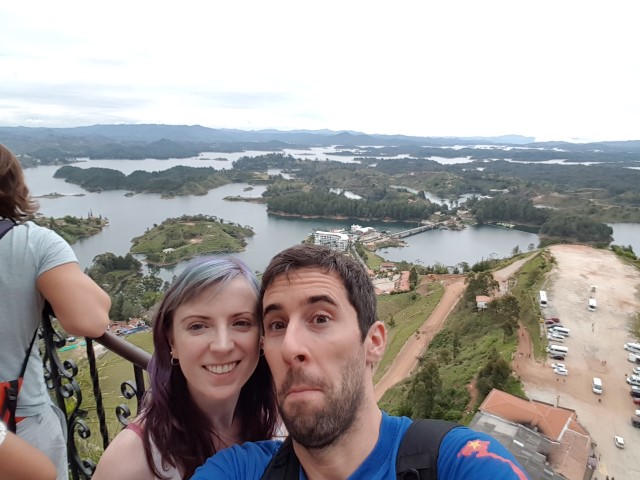 Lovely lakes and jungle, but most our faces.

Back at the base, we took a tuk tuk into the town of Guatape. Guatape is quite beautiful in its own way. It's not particularly pristine, but a huge amount of care is put into making it colourful and attractive. The buildings are covered in murals and bright paint, and often selling tourist tat. There were more tourists in Guatape than we'd seen altogether since arriving in Colombia. I did note a group of 7 backpackers trying to coordinate a bus back into Medellin. 7 backpackers?! Dan and I are a group of two, and even we disagree on plans. How on Earth could you travel with 6 other people? It's impossible.