My first impression of Bangkok was quite good because there was only one taxi rank at the airport. Upon landing in Phuket we were greeted with approximately ten different taxi stands, all with people shouting fare offers. What are you supposed to do? Who do you trust? Not so in Bangkok. One taxi and they're all metered. Easy.

We stayed for two full days and if 'novelty' isn't really your thing, this is plenty. Bangkok took elements from big sky scraper cities, and from the seedy run-down massage parlours of smaller towns in Thailand and mixed them together in a rather unpleasant cocktail.

Our first day took us to some temples, because we'd forgotten how tiresome boiling hot temples get. We took two trains and a river boat (Bangkok is big) and met some backpackers who invited us to sightsee with them. This completely hindered any productive sightseeing we had planned, but was probably a lot more fun. These backpackers (8 of them) taught me that travel-wise I am a complete baby. They were all travelling solo (two girls amongst them) with no plan. 'Where to after Bangkok?' I asked one of the German girls. 'Dunno, maybe get a bus to Chang Mai. Might go to Burma next week.' We had quite literally three spreadsheets of planning for this trip. We booked every flight, every bit of accommodation, researched every bus/taxi/tuk tuk drive. And I marked each cell off green once we had completed the booking. These backpackers had no spreadsheets. Just free spirits. A guy came up to us Khao San Road (big touristy street) selling scorpions on a stick. They all dived right in, while Dan and I tried not to gag. They did say it was like eating a very thin shell and not much else. 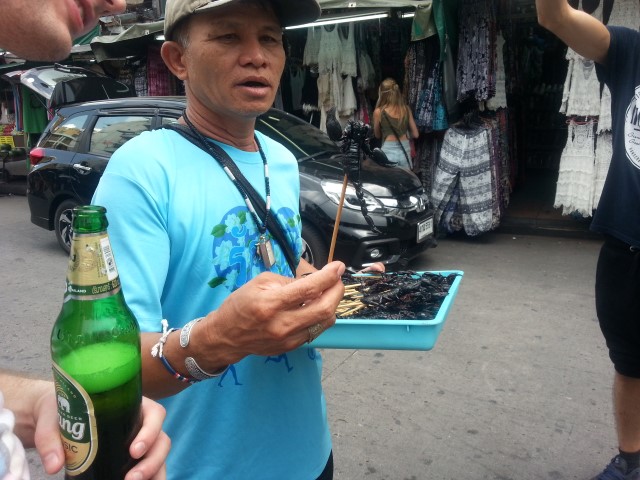 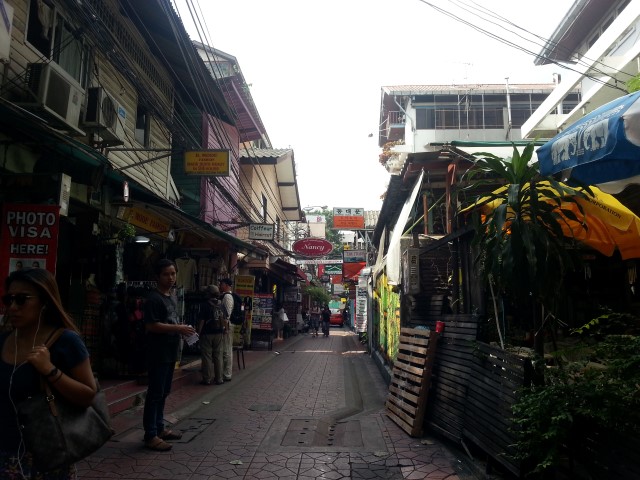 Trying to sightsee with eight people is impossible, and after half an hour we'd lost all but 2 of them. The four of us went to see Golden Mount. It's large, decadent and features some gold (though mostly white). I found this style of temple rather gaudy. It's impressive I suppose. We tried to go to the Grand Palace but were told it was closed. We were suspicious because a well known scam is for someone to stand near a tourist attraction and tell you it's closed. Then you say 'oh no! What will I do?!' and he suggests something else, then he's leading you to his friend's tuk tuk and you're on a tour of all his mate's shops. So we didn't believe him. But he was right. It was closed.

We got the boat back at rush hour. It was completely packed to the rafters, there may even have been people hanging onto the rafters for dear life. They only pull up to the pier for a very minimal amount of time so you have to really push to get on before he leaves. One guy got on but his little daughter was left on the pier. Out of panic he grabbed her as the boat was pulling away. He didn't have a good enough hold and she nearly fell down into the water, right by the mechanism. Luckily the ticket lady hauled her in, then gave the dad a good hard slap in the face for being such an eejit. 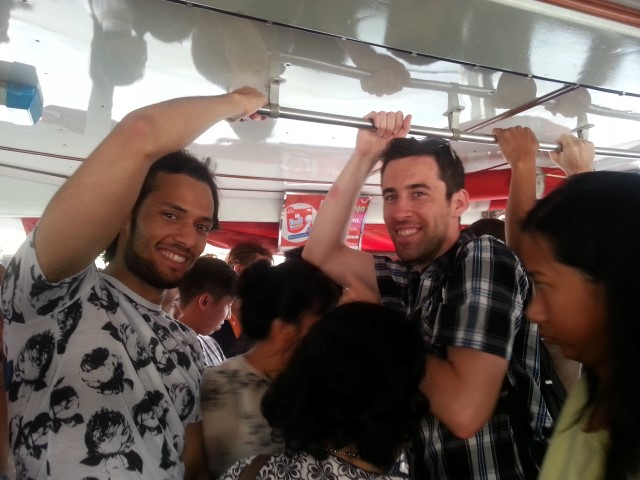 Dan and new backpacker friend Abate cling onto the rafters of the boat for dear life, while I risk death taking this photo 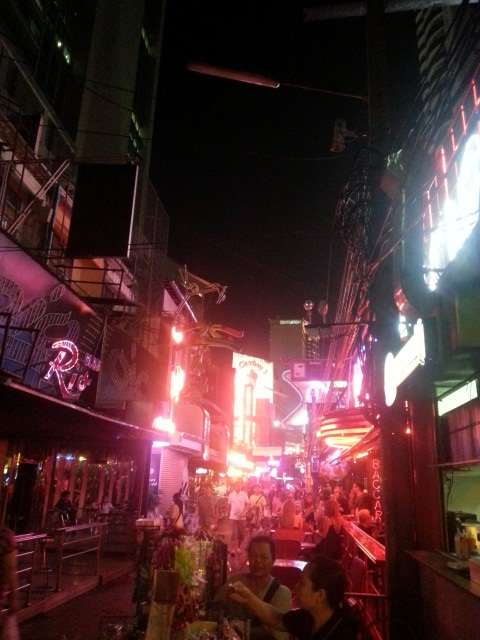 Glitzy with much nudity

As it was dark when we got back we thought we'd see the fabled Soi Cowboy street (also, conveniently it was right behind where we were staying). Soi Cowboy is a street of neon and strip clubs. The ladies sit outside in bikinis with numbers attached and beckon you in. The doors are often open a teeny bit so you can see a teaser of a pole dance. I'm glad we saw it. No need to go back.

For our last day we tried to see the bits we missed previously because we were too busy faffing about with the backpackers. Reclining Buddha and the Grand Palace. Both large, white, decadent and not very nice. Outside the Reclining Buddha temple, a guy in a 'uniform' told us it was no use going in now, prayers are in session and we won't even be able to see it. Contrary to our well-meaning friend of the previous evening this guy was a outright liar. Anyway, this Buddha is so giant that no amount of praying Buddhists could really obscure your view.

They really don't like shoulders or knees. I covered my shoulders but foolishly left my sexy knees exposed so always had to don some sort of enormous unflattering dressing gown. I thought Buddha was meant to be laid back but when it comes to shoulders and knees he must've just flipped out. 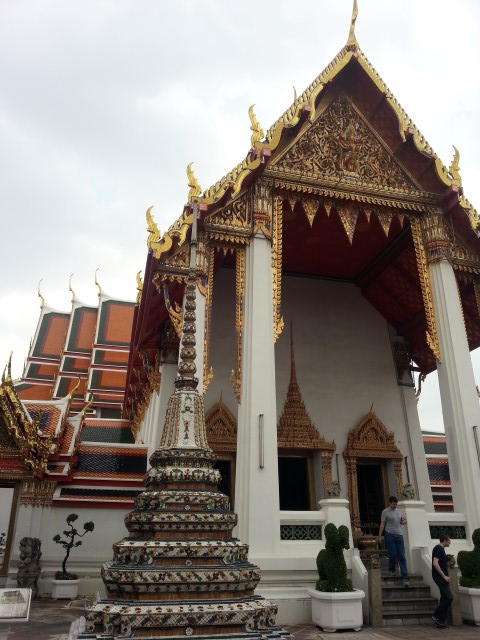 This is either the palace or a temple. I think it's the palace. You'd be forgiven for not remembering. 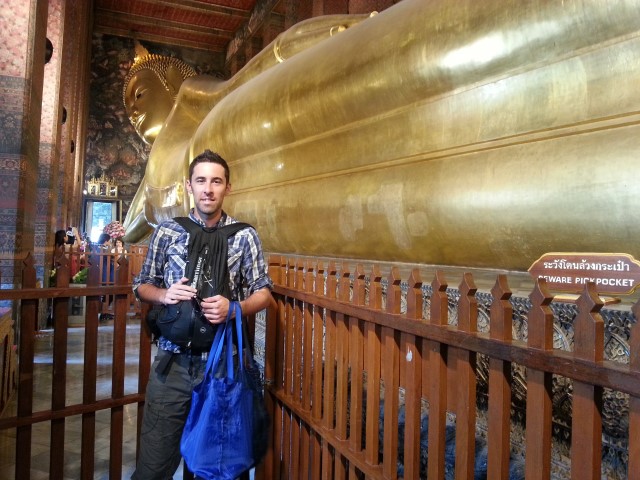 If anything this Buddha is TOO big 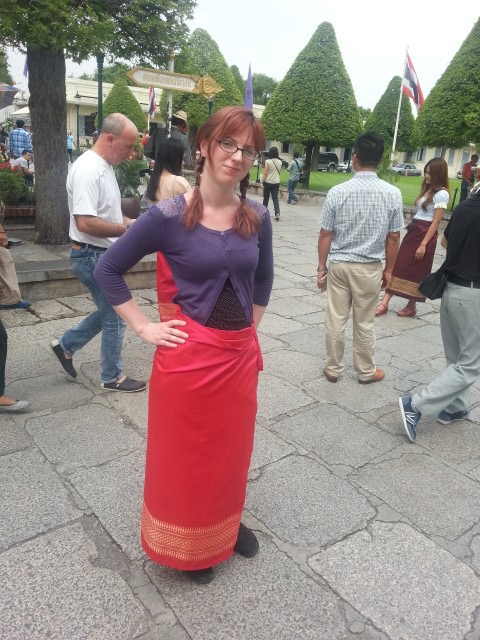 This was the most stylish garment I was given to wear. Tragically I don't have a photo of the enormous canary yellow dressing gown.

On our way back we saw a lot of streets selling enormous golden Buddhas. Do people buy these? Do tourists buy them? How does anyone transport them? Why are there so many shops selling them? 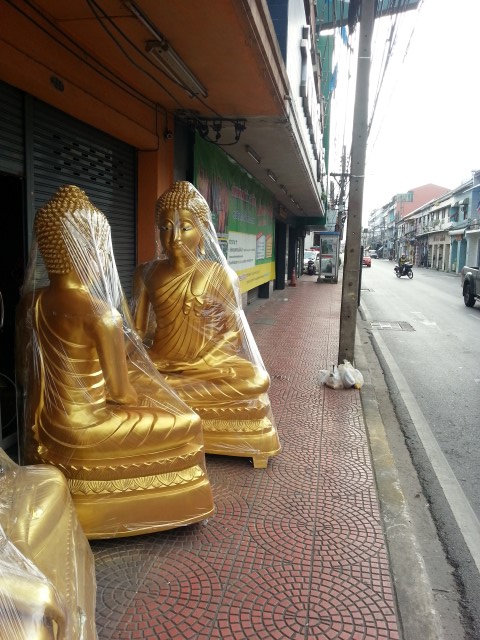 A rather interesting stop was the house of Jim Thompson, an American stationed in Thailand by the CIA in WW2. He loved the place so much that he decided to live there, and as an architect built a beautiful Thai-style mansion in Bangkok. He set up a silk business and became even richer than he already was (which was pretty rich to start with). The interesting part is several years later he went on a trip to bangkok and was never seen again. No sign of his body. I tried to solve the mystery by looking for clues in the house but the tour guide asked me to stop. 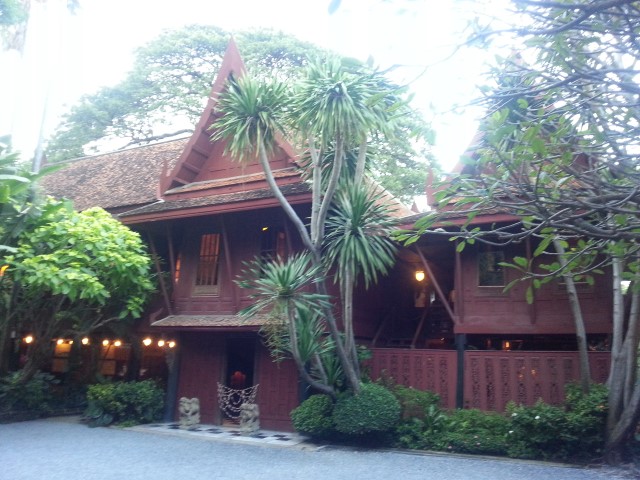 It would be terrible to go all the way to Thailand and not see Bangkok. It has character. Dan liked it more than I did. He was endeared by its rather rough edges, and liked how they didn't try to hide away the grimier elements, like Shanghai or Singapore. I see his point but am not enamoured. Still, you don't have to like a place to enjoy it.

22 October 2015
I agree that less pretty places are often more memorable than the beautiful tourist traps. When something goes wrong, that's memorable.