A few people told me not to bother with Singapore, as it was just a big city. What they didn't say was that it's a big city that looks like a futuristic utopia straight out of pretty much any Sci Fi film. I pretended I was in space for much of the trip.

These grumpy people were correct in telling us that we could see a lot of it in one day. My friend Darren lived there for 6 months and gave me a to-do list. I think we achieved everything in our one day (two nights) stay.

Reception told us to walk to Marina Bay, which is the bit you see if Google Image search Singapore. It was a little longer than the stated 15 minutes (about 4x longer) but we didn't mind as our route took us through the rather bizarre, and very spacey, Suntec City. I'm not sure what Suntec City is for, but it seems to be a lot of fancy glass and chrome buildings with lovely lobbies, around an elaborate monument rather ostentatiously called the Fountain of Wealth. Some of these buildings were so fancy that they seemed to air condition the air outside the front door. I'm sure that's expensive but they probably don't mind as they clearly make lots of money in the 'being made from glass and chrome and looking futuristic' industry. 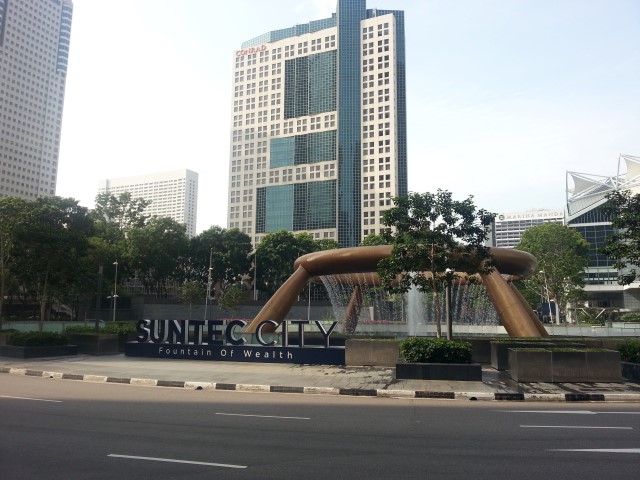 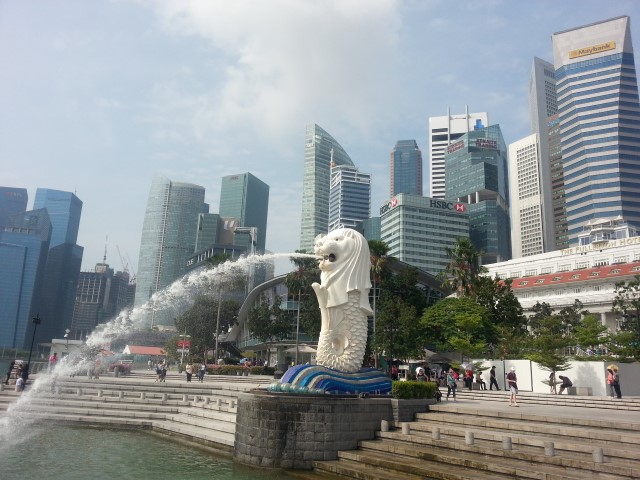 Our first Marina Bay stop was the Merlion. I was familiar with the Merlion as I had taken the time to Google Image search 'Singapore' before our trip. It's not as big as it appears. We grumpily elbowed our way through lots of annoying photo-taking tourists so we could take some photos.

Marina Bay Sands is famous to me, because Darren knew a guy with a guest pass and got to go up to the incredible rooftop infinity pool. I asked him to hook me up with a guest pass but he explained he hadn't actually lived in Singapore for a number of years. Selfish. Marina Bay Sands is a hotel with three towers and what looks like a boat across the top. He, and my cousin Frances, both said to just go up anyway and have a look even though you can't use the pool. I thought this meant you could at least see the pool, and the garden, but not so. You pay your $20 (this was before we found out the exchange rate between Aussie and Singapore dollars is 1:1, a devastating discovery) and look at Singapore from a very tall viewing deck. You can't even see the pool or garden. Even though the thing you're meant to going up to is called 'Sky Garden'. They would be better off calling it 'Sky urban garden that will realistically only fit some nice decking'. It didn't even have a bench. I'm done with tall buildings now. Never again. Every city looks the same from a tall building. 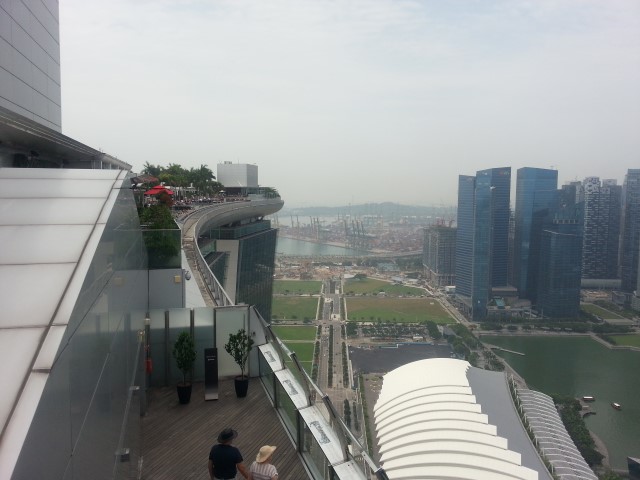 As roof decks go it was ok

Beyond the Marina Bay Sands is the Bayside Gardens and these are wonderful. They feature Super Trees, which are big metallic tree-like structures, that have plants growing up them. Unsurprisingly you can pay to go up to the top and walk around a linking pathway. Since the thing I wanted to look at was the trees and the linking pathway, I didn't bother.

We gave up on walking after that. The temperature was 31 degrees and there was an underground train that would take us to Smith Street, which has lots of wonderful street food. Which we completely avoided and ate lunch in a clean looking salad place that had a certificate of hygiene on the window.

Orchard Street is a big fancy shopping street with too many malls. We made use of the air conditioning.

Our last stop was Little India. This is a rather more realistic looking district of Singapore. While I can appreciate the rustic charm to an extent, I'd much rather the shiny spacey looking parts. 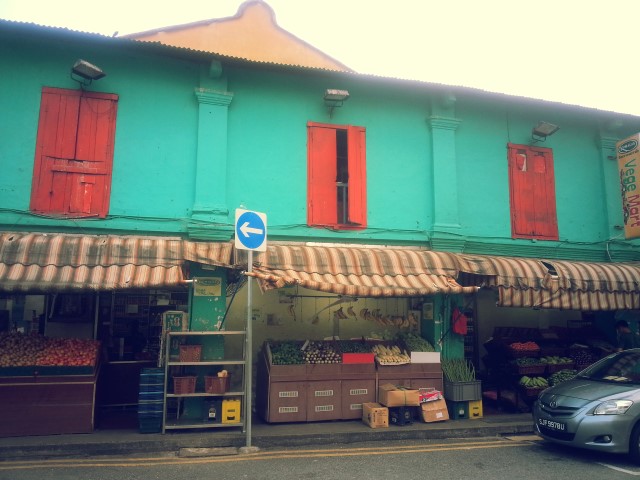 Singapore is my favourite Asian city so far. It's more expensive than Melbourne, but that's what you pay to live in white, glass and chrome. They offset all the buildings with a huge amount of trees and greenery. I've never seen anything quite like it. I'd quite happily live there if it weren't for the heat.