The Bullet Train isn't as exciting as I'd hoped. It's comfy and fast, but I had 'rollercoaster fast' in mind. Truth be told, it didn't seem any faster than a normal train. It looks really cool from the outside and did get us to Tokyo in about 4 seconds, so I'll give it that.

We arrived in a train station the size of Ireland and walked for three days underground, eventually arriving at the entrance to our hotel. We didn't go outside once, from when we left Kyoto to arriving at our hotel reception. The hotel had a specific underground walkway, so in fact the whole 5 days we were in Tokyo we never actually saw the outside facade.

The Tokyo Pedestrian Scramble is a 7-road junction in the city centre, and must be viewed at night. The towering surrounding buildings light up with scrolling colourful billboards that no one reads, but it creates a frenzied atmosphere. Also it's that bit you always see on TV. When I was about 12, I remember seeing some movie that showed the Pedestrian Scramble junction and thinking "I never want to go there." Sorry 12 year old Anthea. 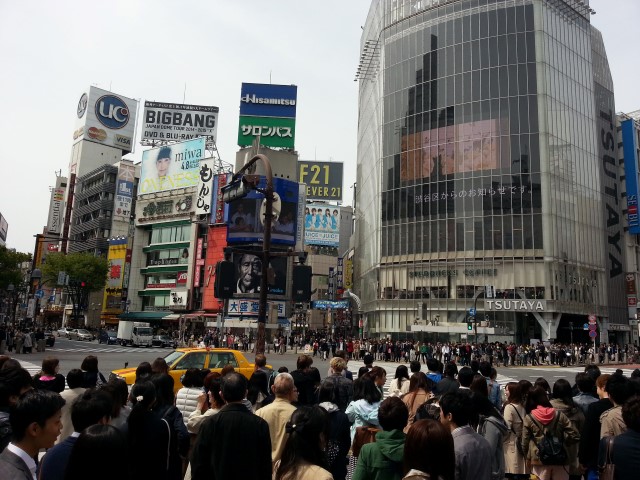 Pedestrian Scramble by Day is Okay 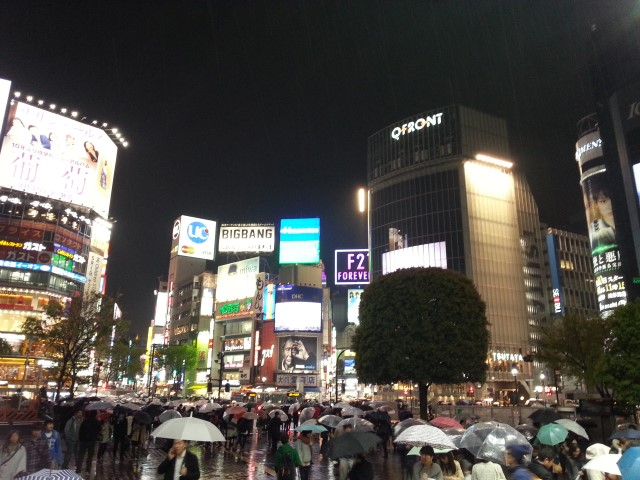 Pedestrian Scramble by Night is Glitzy

Unlike miserable 12 year old Anthea, current Anthea wanted to go to one of those skyview bars, set in the top of a huge Tokyo skyscraper. There was one, a Bar and Grill, right next to the hotel (also, apparently only accessible from under the ground). We traipsed into the elevator on our way back from some sightseeing, to see if we could pop by that evening. We were joined in the elevator by a group of girls dressed in floor-length ball gowns, and two men in tuxedos. There were two men on the door who took one look at our practical, sturdy jackets, threadbare runners and 'I've been on lots of trains today' hair and dismissed us. We tried to explain that we could come back later with less practical jackets, and more refined hair, but he refused to even entertain the idea and we were ushered back into the lift. Happily though, before we left I managed to get into a few background photos of the glamorous elevator group, practical jacket and all. Our dreams were shattered, though Trip Advisor told us that the staff were rude, and it cost 80 euro for a steak, with no chips.

A couple of days later we realised that there was a bar right across from it, on the same floor, with no dress code. They let us in no problem, and apart from giving us a piece of unwanted gelatinous vegetable with our drinks, and charging us for it, they were perfectly lovely. We were among the last people in the bar so they even brought us to all the best spots (that you usually have to book) to show us the finest view. 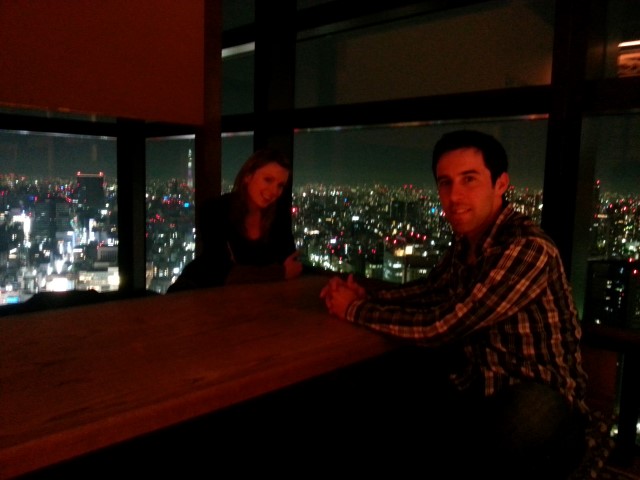 Some well meaning Trip Advisor advice told us you could sometimes see Mount Fuji from a lake called Lake Ashi, and that it was a generally lovely place to visit. The weather had deteriorated to Apocolypse-Level at this stage, but we were running out of time so we battled our way through sideways-rain and took the following modes of transport to Lake Ashi:

Train, bullet train, another train, a country train up winding mountain roads (very scenic if not for sheets of rain I'm sure), a very cold funicular rail, then a terrifying cable car across a very high valley to the mountain top. At this stage we'd sort of forgotten why we were going, and what we were meant to see, but the cable car dropped us at a building so we went inside. It had a really great buffet and was warm. Unfortunately we couldn't stay there forever so we got another cable car back down the mountain, and took a novelty pirate ship across Lake Ashi. You could only see clouds of course, but the pirate ship was rather nice. It dropped us to a bus terminal. Which brought us to the bullet train. And after that we had only to get a train back. I'm still not sure what we were meant to see, but it was a good showcase of all of Japan's public transport. 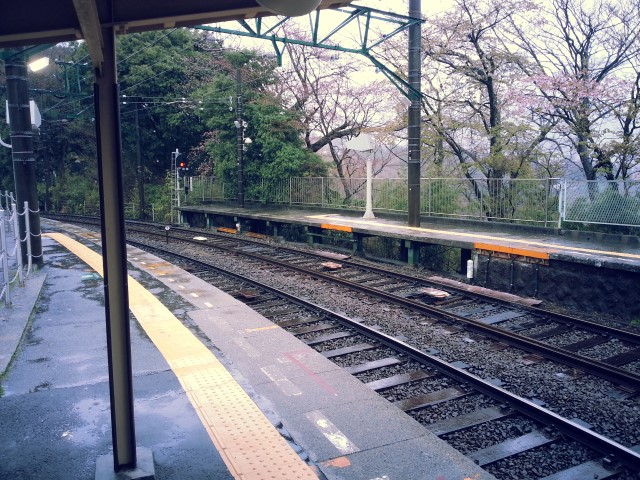 Dan discovered the 'Cold Vintage' setting on his camera, which greatly enhances this picture of a railway line 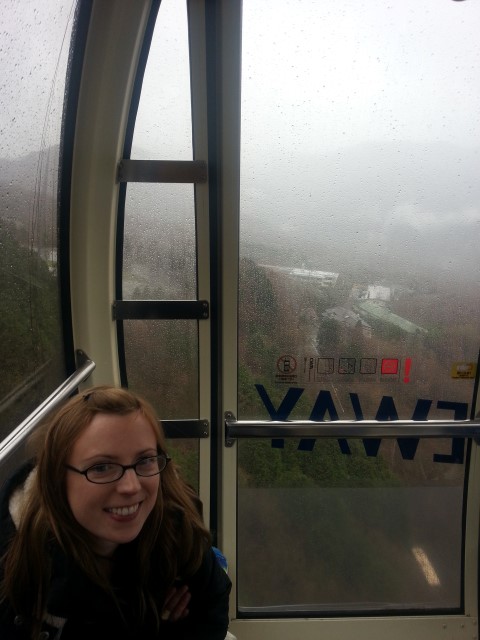 My first time in a cable car. Nail biting stuff. 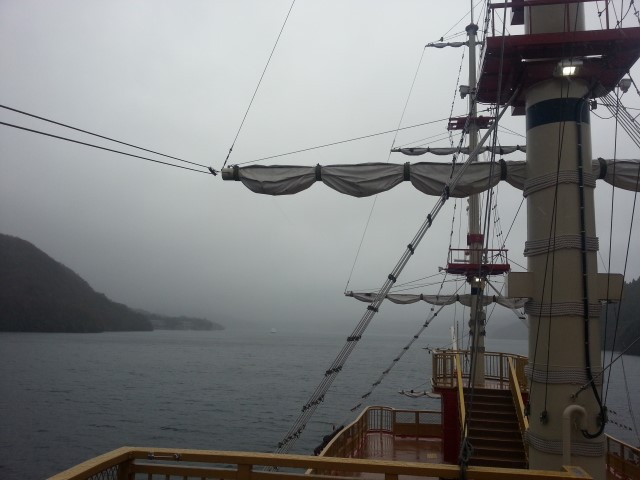 It is a pirate ship.